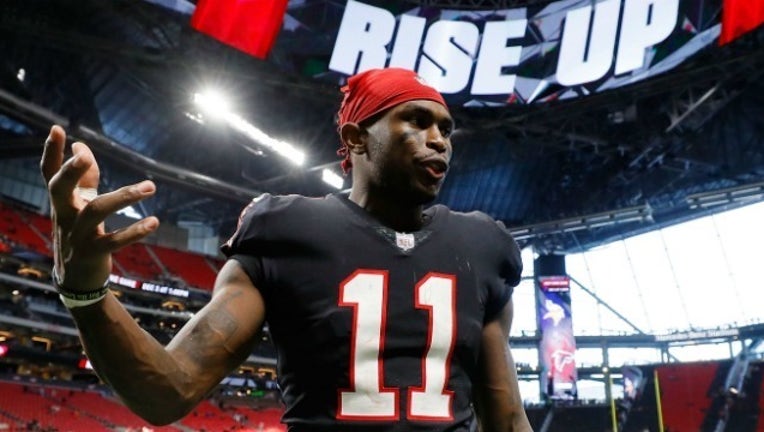 LANDOVER, Md. (AP) - Julio Jones ended his 12-game touchdown drought, Matt Ryan threw for 350 yards and four scores and the Atlanta Falcons flexed their offensive muscles with a 38-14 blowout of the Washington Redskins on Sunday that extended their winning streak to three games.

Jones caught seven passes for 121 yards with the biggest coming on a 35-yard screen pass with just under four minutes left that sealed the victory. After Jones twisted away from newest Washington defender Ha Ha Clinton-Dix and into the end zone, a swarm of teammates rushed over from the sideline to celebrate Jones' first touchdown catch since Nov. 26, 2017.

Ryan completed 26 of his 38 passes, including touchdown passes of 39 and 10 yards to running back Tevin Coleman and 40 to rookie receiver Calvin Ridley . Coleman ran for 80 yards and Ito Smith had 66 yards and a rushing touchdown to give the Falcons (4-4) the balanced attack they've lacked in an injury-marred season that so far has failed to live up to expectations.

The Falcons didn't punt until midway through the third quarter, converting on their first eight third-down opportunities. They surpassed 100 yards rushing for the first time since Week 2.

Atlanta's much-maligned defense did its part, too. Entering third-worst in the NFL, it held Washington to 35 first-quarter yards and made a crucial stop after Ryan was picked off by Quinton Dunbar - just the quarterback's third interception this season.

The NFC East-leading Redskins (5-3) could blame poor tackling, ill-timed penalties and a series of injuries along the offensive line for the end of their three-game winning streak. Already without left tackle Trent Williams after surgery to repair his dislocated right thumb, Washington lost left guard Shaun Lauvao to a left knee injury, right guard Brandon Scherff to a shoulder injury and struggled to move the ball or stop the Falcons when it mattered.

Adrian Peterson was held to 17 yards on nine carries a week after rushing for 149 yards at the New York Giants. Alex Smith was 30 of 46 for 306 yards, an interception and a touchdown pass to Josh Doctson, and third-down back Kapri Bibbs rushed for a score that only served to make the final margin look slightly less lopsided.

Falcons safety Damontae Kazee effectively ended any chances of a Redskins comeback when he picked off Smith with about seven minutes left. The ball hit off the hands of teammate Blidi Wreh-Wilson, and Kazee came down with it along the sideline.

But that wasn't it. After the play, Kazee ran toward the corner of the stadium full of Falcons fans and did his best Ryan impression by throwing the ball to the top of the lower deck.

As inconsequential as Washington's ground game was, Smith had its longest gain of the day on a scramble that helped set up a touchdown. With Peterson blocking for him, the 34-year-old picked up 22 yards before being stopped on a crushing shoulder-to-shoulder hit from Brian Poole at the Atlanta 19.

Falcons: Calvin Ridley left in the third quarter and was evaluated for a head injury. ... K Matt Bryant missed his second consecutive game with a right hamstring injury. ... CB Robert Alford was out with an ankle injury, the first game he has missed since 2015.

Redskins: Played stretches without three-fifths of their starting offensive line and lost Lauvao to a potentially serious knee injury. Lauvao injured his left knee on the third play of the game, was taken off the sideline in a wheelchair and did not return. RT Morgan Moses injured his right knee in the first quarter before returning in the second. .. Dunbar left twice with leg injuries. ... WR Jamison Crowder missed his fourth consecutive game with an ankle injury, and RB Chris Thompson was out with injured ribs.

Falcons: Aim for their fourth win in a row when they visit the Cleveland Browns on Sunday.

Redskins: Look to rebound at the Tampa Bay Buccaneers on Sunday.