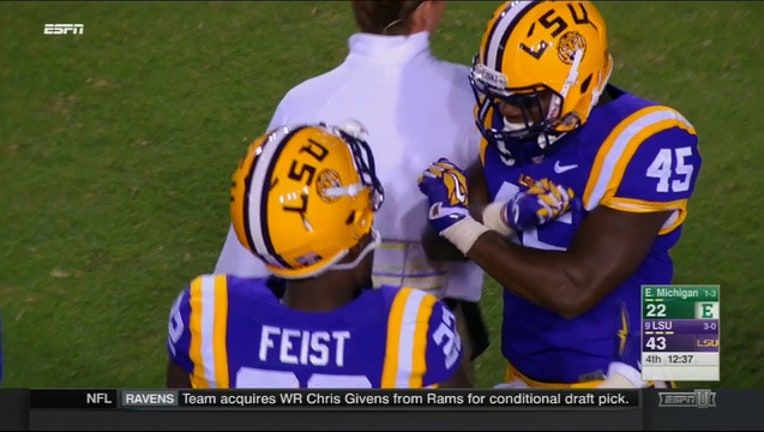 Atlanta chose LSU linebacker Deion Jones in the second round on Friday night, hoping shore up a pass rush that's been among the NFL's worst over the last three years.

In the third round, the Falcons selected Stanford's Austin Hooper, who likely becomes the No. 2 tight end behind starter Jacob Tamme.

After picking Florida strong safety Keanu Neal with the 17th overall pick on Thursday, second-year coach Dan Quinn sought to upgrade the front seven with the selection of Jones, a team captain at LSU last season.

Atlanta has ranked no higher than 28th in sacks since 2012.

General manager Thomas Dimitroff brushed aside criticism that the Falcons reached too high to take Neal, who many projected as a second-round pick.

"Our staff always had him as a first-round pick, and I'm very proud of the prowess of our scouting staff, evaluating and slotting properly," Dimitroff said. "We felt very comfortable with where he was."

When he decided to leave Florida after his junior year, Neal was told to expect a second-round selection.

"I didn't really care where I went," Neal said. "It's just a starting point for me."

Quinn's first team began last season 6-1, but as the Falcons lost seven of their last nine games, he already looking at ways to compete better in a division that includes quarterbacks Cam Newton, Drew Brees and Jameis Winston.

Hooper will have to beat out Levine Toilolo, another former Stanford tight end who played behind Tamme last year and was a rookie behind NFL legend Tony Gonzalez in 2013.

To acquire Jones, the Falcons moved down two spots in a trade with Houston and added a sixth-round pick.

Quinn and Dimitroff needed another pick. Otherwise the Falcons would've begun the third and final day of the draft Saturday with just a fourth- and seventh-rounder.

Atlanta was without a fifth-round pick as punishment from the NFL for piping in fake crowd noise at home games. The Falcons didn't have a sixth-rounder after acquiring left guard Andy Levitre in a trade last summer with Tennessee.