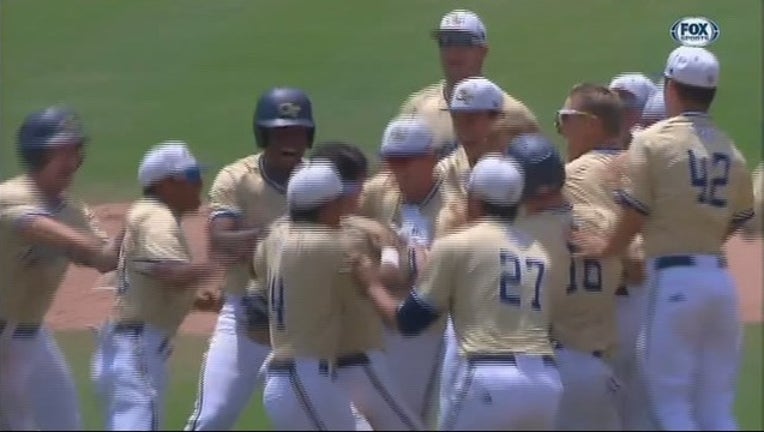 DURHAM, N.C. (AP) - Tristin English doubled off the left-field wall with one out in the bottom of the ninth inning Friday, giving Georgia Tech a 5-4 victory over Duke and a spot in the Atlantic Coast Conference Tournament semifinals.

English, who also hit a two-run home run and pitched two hitless innings to earn his third victory in as many decisions, drove in Luke Waddell, who walked leading off the inning against Blue Devils reliever Thomas Girard (1-5) and went to second on a sacrifice.

Waddell had two hits and scored three times for the second-seeded Yellow Jackets (40-16), who will face North Carolina State in the semifinals on Saturday.

Duke (31-25) took a 3-0 lead in the first on an RBI single by Michael Rothenberg and Chris Crabtree's two-run single. Rothenberg's double-play grounder brought home another run in the third.

English homered in the bottom of the first and Kyle McCann added a two-run shot for Georgia Tech in the third.

·         Georgia Tech advances to the ACC Tournament semifinal for the first time since 2014 when the Jackets were crowned ACC Champions a day later.

·         #CardiacJackets struck again, winning their fourth walk-off of the season and their 10th one-run ballgame. Tech is 12-4 in games decided by two runs or less.

·         Kyle McCann’s intentional walk on Friday broke the single-season program record for most IBB’s, giving him 18 on the year. He surpasses Mark Teixeira, who was dealt 17 free bases intentionally in 2000.

·         Tristin English’s performance on Friday marked the first time collegiately he has received the win on the mound while also hitting a walk-off.