PHILADELPHIA - Eli Manning walked over to a waiting group of friends and family outside the Giants locker room, leaned in and gave his wife, Abby, a kiss on the cheek. Abby had vowed years ago after a rough night among the Philly crowd she would never watch a game in the city again.

But an exception had to be made, Manning made his first start for the Giants in three months, and there's no guarantee he'll get many more.

"She kind of had to break her rule and come for this one," Manning said. “I hadn't played in three months. I don't know if I'm going to play again.”

Manning has fallen from Super Bowl champ to substitute starter, and a couple of early flashes of success against the Eagles could not be sustained in the second half. The Eagles rallied from a 14-point deficit, and Carson Wentz tossed a 2-yard touchdown pass to Zach Ertz in overtime to lead them to a 23-17 win on Monday night.

Manning grabbed his helmet and went to midfield to shake hands, whisper and smile with Eagles and Giants before he headed back to locker room with another L on his record -- 116-117, oh, but with two Super Bowl championships. 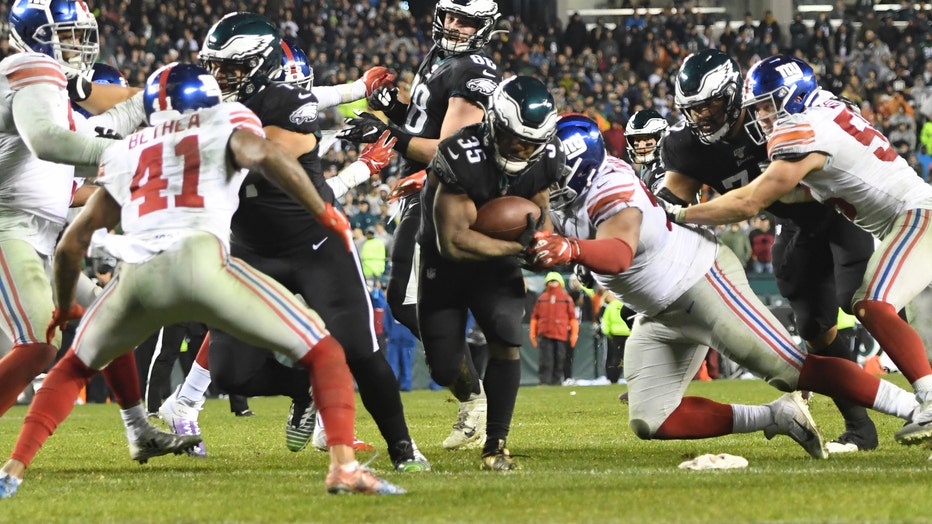 "I didn't know it, so no thoughts," Manning said.

The ignominious records have piled up this season for the Giants. The Giants lost their ninth straight game, tying a franchise record set in 1976, when the team opened 0-9.

Manning, who turns 39 next month and will become a free agent after the season, hasn't thought much about his future. He only got the start because 22-year-old rookie Daniel Jones, who replaced Manning after Week 2, is out with a high ankle sprain. It's uncertain when Jones will return so it's possible Manning could finish out the season.

So that leaves the question, when will Manning decide if he returns for next season?

"Probably next year," he said, smiling.

Manning was 15 of 30 for 203 yards and threw a pair of TD passes to Darius Slayton, but 179 yards came in the first half. He only completed four passes for 24 yards in the second half, and did little to prove coach Pat Shurmur was wrong to bench him.

"I thought he battled. He did a lot of good things," Shurmur said.

Shurmur also is on the hot seat and may be gone at the end of the season, just like Manning.

With big brother Peyton watching from a suite, Manning fell to 10-23 against the Eagles, including a pair of playoff losses. He started 232 games -- all but one in 2017 -- after replacing Kurt Warner for the final seven games in 2004. Coming off the bench is a new experience, one that Manning welcomed after he was relegated to the scout team.

"It's why you practice and play, to go out there and compete on Sundays," Manning said.

He'll likely get another chance by default when the Giants return home to play Miami. The Giants play at Washington and finish the season at home against the Eagles.

"I've played a lot of football games. I know the offense and I know what I'm supposed to do," Manning said.

Again, the fading QB just couldn't do it well enough to help the Giants.