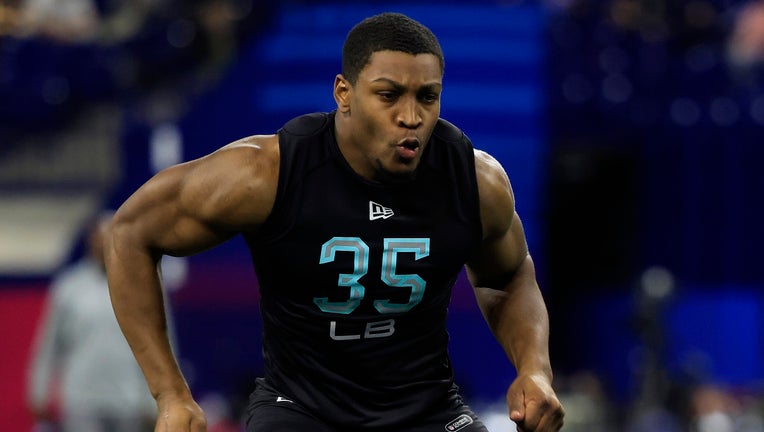 Channing Tindall #LB35 of the Georgia Bulldogs runs a drill during the NFL Combine at Lucas Oil Stadium on March 05, 2022 in Indianapolis, Indiana. (Photo by Justin Casterline/Getty Images)

LAS VEGAS - Channing Tindall will forever be the No. 102 pick in this year's NFL draft.

For Tindall, and for the Dolphins, two days of waiting finally ended late Friday night. The Dolphins took the Georgia linebacker with the 102nd overall pick, their first of this year's draft. They brought out Larry Csonka, part of the 1972 perfect Dolphins team, to make the pick in Las Vegas.

The draft concludes with Rounds 4-7  in Las Vegas on Saturday. Miami has three more picks to make -- No. 125, midway through the fourth round, then two seventh-rounders toward the end.

It's all been done, several times.

But never all at once -- that is, until now.

Barring a trade Saturday to change things up, this draft by the Dolphins will be like none other. They would be the first team in the Super Bowl era to have zero top-100 picks, only two picks in the first 200, and a total of no more than four picks in the entirety of the draft.

Thursday's opening day of the draft came and went with nary a peep from the Dolphins, who traded their first-round pick earlier this month as part of the haul that brought wide receiver Tyreek Hill to Miami from Kansas City.

They didn't get on the clock in this draft until late Friday night, when Tindall finally got to hear his name called.