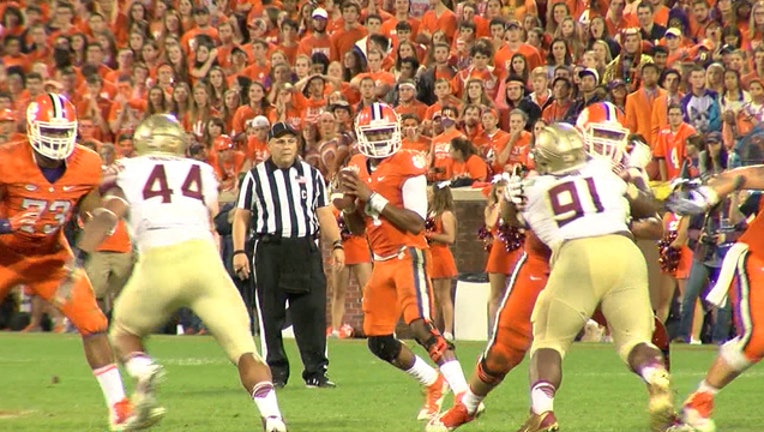 RALEIGH, N.C. (AP) - Clemson's Deshaun Watson still thinks about carrying an unbeaten record into the final game of the season before losing to Alabama with a national championship on the line.

The Tigers and their star quarterback are the preseason favorite to win the Atlantic Coast Conference and be positioned to return to the College Football Playoff, but there's another team — Florida State — that enters the season with a playoff shot within reach.

In fact, it's not impossible that both teams could find themselves in playoff position coming out of a league where the balance of power is tipped heavily toward the Atlantic Division that includes both the Tigers and Seminoles.

"We know how to get there," Watson said of last year's title-game loss. "We've experienced it and we've got to start over this year and try to get back there."

Clemson (14-1) and Florida State (10-3) have combined to win the last five ACC championships. They've combined to go 57-3 against the rest of the league, while the last time either lost to a division opponent came nearly four years ago.

"We've been able to recruit well and have very good players and we've been able to coach them well," Seminoles coach Jimbo Fisher said of the gap between the Atlantic powers and the rest of the league. "Not that other guys haven't, but we've been able to be fortunate in certain games. I mean, we've created a culture that right now we're both playing pretty well."

Clemson. The Tigers were the preseason pick by media members over the Seminoles. While Louisville is poised to make a leap in Year 3 under Bobby Petrino, it would be a shock if the Tigers and Seminoles don't finish atop the division.

North Carolina. The Tar Heels are coming off an 11-win season and are trying to become the first repeat Coastal champion since 2011 in a typically wide-open division.

Watson, Clemson. Last season, he was ACC player of the year, third in Heisman Trophy voting and the Manning Award winner as the nation's top quarterback. All as a sophomore.

Dalvin Cook, Florida State. The Seminoles have their own Heisman candidate with a junior running back who ran for an ACC-best 1,691 yards and 19 touchdowns last year.

Elijah Hood, North Carolina. The junior is a physical presence for the Coastal champions after running for 1,463 yards and 17 scores.

Mark Richt, Miami. He spent the past 15 seasons at Georgia but is now at his alma mater, trying to provide a jolt to a one-time power that has yet to win the Coastal title.

Bronco Mendenhall, Virginia. The Cavaliers have one winning season in eight years. Now it's up to the former BYU coach to turn things around.

Dino Babers, Syracuse. The former Bowling Green coach takes over a Syracuse program that has seven wins in the past two seasons.

Eli Drinkwitz, North Carolina State. Drinkwitz is the Wolfpack's new offensive coordinator after leading one of the nation's top offenses at Boise State. He inherits a team looking for a new quarterback.

James Conner, Pittsburgh. This is a welcome-back season for the running back and 2014 ACC player of the year who went down with an opening-game knee injury, then battled lymphoma.

ON THE HOT SEAT

Boston College's Steve Addazio is coming off an 0-8 ACC season.

Atlantic: Florida State. In what could be a coin flip between two talented teams, the Seminoles' home-field advantage for the Oct. 29 meeting with the Tigers could be the difference.

Coastal: North Carolina. The Tar Heels are breaking in a new quarterback but have several key pieces back from an offense that averaged 40.7 points and 486.9 yards per game. That could again provide cover for a questionable defense, though its matchup with Miami and quarterback Brad Kaaya comes on the road Oct. 15.