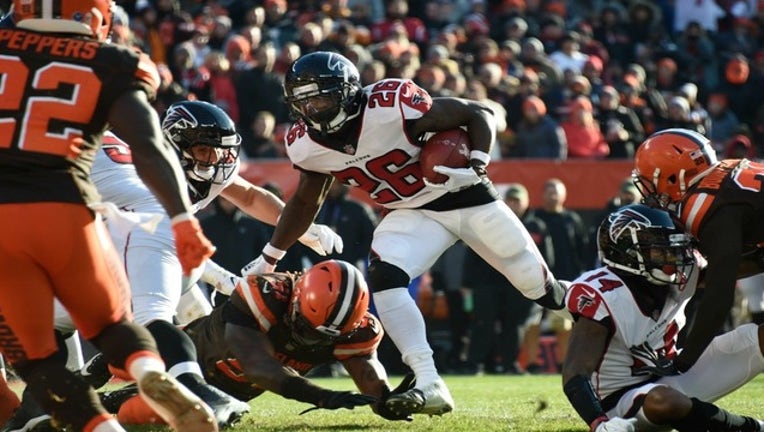 CLEVELAND (AP) - Rookie Baker Mayfield threw a season-high three touchdown passes and rookie Nick Chubb streaked 92 yards for a TD and the Cleveland Browns ended a four-game losing streak with a stunning 28-16 win over the Atlanta Falcons on Sunday.

The Browns (3-6-1) played their most complete game this season under interim coach Gregg Williams, their defensive coordinator who improved to 1-1 since replacing the fired Hue Jackson.

Mayfield outplayed Falcons star quarterback Matt Ryan with a performance that further justifies Cleveland's decision to take the QB with the No. 1 overall pick in this year's draft.

Mayfield completed his first 13 passes and finished 17 of 20 for 216 yards. He threw a 28-yard scoring pass to Rashard Higgins, a 13-yarder to Chubb and 11-yarder to Duke Johnson.

Ryan and the Falcons (4-5) had their three-game winning streak - and any playoff momentum - stopped cold.

And while Mayfield did damage, Chubb's record run was the backbreaker.

With the Browns backed up at their 8, Chubb, who had 176 yards on 20 carries, took a handoff and headed right. He cut toward Atlanta's sideline, picked up a block and then showed his surprising breakaway speed while finishing the longest run in team history.

Chubb's run broke the previous team mark held by Bobby Mitchell, who had a 90-yard TD run against Washington on Nov. 15, 1959.

The score put the Browns ahead 28-10, an unexpected and unescapable hole for the Falcons, who blew a chance to get closer in the fourth when they were stopped inches short of the goal line.

Atlanta receiver Julio Jones had 107 yards and became the fastest player to reach 10,000 yards receiving with a 30-yard catch in the second quarter. Jones reached the 10,000-yard plateau in his 104th game, 11 quicker than Calvin Johnson got to the milestone.

Moments later, Ryan completed a 1-yard TD pass to Jones to give the Falcons a 10-7 lead.

Mayfield, who lamented his accuracy issues in last week's loss to Kansas City, went 12 of 12 for 165 yards and two TD passes in the first half, finishing with a 158.3 rating.

Mayfield didn't throw his first incompletion until 11:14 remained in the third quarter, but two plays later, he connected with Johnson to put the Browns ahead 21-10.

The score came after cornerback T.J. Carrie jarred the ball away from Falcons receiver Mohamed Sanu.

Plagued by slow starts, the Browns took a 7-0 lead in the first quarter on Mayfield's pass to Higgins, one of the QB's favorite targets who was playing his second straight game after missing three weeks with a knee injury.

It was Cleveland's first TD in the opening quarter this season.

New Browns offensive coordinator Freddie Kitchens joked earlier in the week he might bring back the "wishbone" - a three-back formation popular with college teams in the 1970s.

Cleveland used a variation of the wishbone on several plays.

While Mayfield was sublime in the first half, the Browns did have one interception.

Running back Dontrell Hilliard took a pitch and threw an ill-advised pass back toward Mayfield, who was well covered and the ball was picked by Falcons safety Damonte Kazee.

The Browns started Greg Robinson at left tackle for the second straight week in place of rookie Desmond Harrison.

The No. 2 overall pick in 2014, Robinson is getting a fresh start with the Browns, who signed him as a free agent before training camp. He previously played for the Los Angeles Rams and Lions.