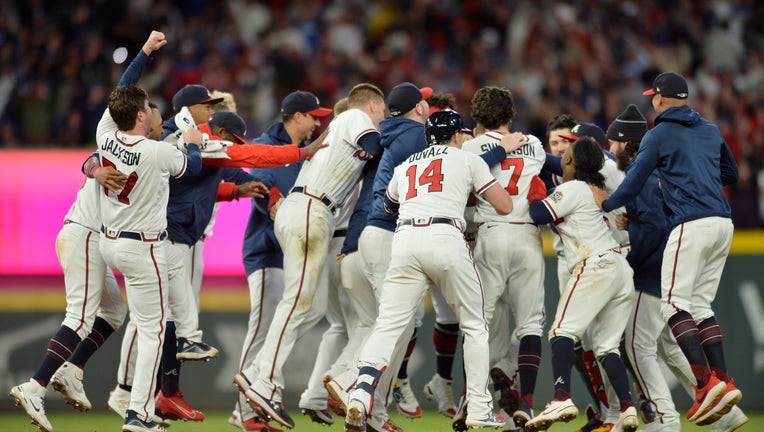 ATLANTA, GEORGIA - OCTOBER 16: Austin Riley #27 of the Atlanta Braves celebrates with teammates after hitting a walk-off single against the Los Angeles Dodgers during the ninth inning of Game One of the National League Championship Series at Truist P

ATLANTA - The Atlanta Braves defeated the Los Angeles Dodgers in Game 1 of the NL Championship series in walk-off fashion in front of a capacity crowd.

Austin Riley delivered an RBI single to left field with Ozzie Albies on second base to break a tie ball game and deliver the Braves a 3-2 victory in the bottom of the 9th Saturday night.

Will Smith came on in relief as the game was tied 2-2, and pitched 1 inning to earn the win. The Dodgers Blake Treinen was credited with the loss.

The Braves' next starters are expected to be Ian Anderson and Charlie Morton. Braves manager Brian Snitker plans to have a bullpen game later in the series, likely in Game 4.

The plans for the bullpen game affected the makeup of the Braves’ NLCS roster. Snitker will have 14 position players and 12 pitchers as he prepares to use pinch-hitters earlier in the bullpen game.

The Dodgers are carrying 13 position players and 13 pitchers.

The Braves added right-hander Chris Martin and infielder Johan Camargo to their 26-man roster. Martin and Camargo replace left-hander Dylan Lee and outfielder Terrance Gore from the Braves’ roster for the NLDS win over the Milwaukee Brewers.

Roberts said he wanted Bruihl for matchups with left-handed hitters. Roberts said it wasn’t easy to leave Price off the roster.

"With David and his experience, it was a very difficult call for us," Roberts said.

The Braves opened the series without outfielder and leadoff hitter Jorge Soler as they await his clearance following his positive COVID-19 test.

Dansby Swanson hit leadoff after Soler was pulled from the lineup before Game 4 of the NLDS.

Next up, the Braves play the Dodgers in Game 2 of the NLCS at Truist Park on Sunday. First pitch is scheduled for 7:37 p.m.