ATLANTA - The poor performance of Atlanta's defense under the leadership of Raheem Morris won't matter if Morris finds a way to win as the Falcons' interim coach.

The more Morris wins, the better he'll look to Falcons owner Arthur Blank as perhaps more than just a temporary replacement for the fired Dan Quinn. With 11 games remaining, Blank figures it's a perfect audition opportunity for Morris.

Can Morris, elevated Monday to interim coach, be a candidate for the full-time job?

"Absolutely," Blank said, adding with a smile, "if Raheem ends up 11-0, he'll certainly be a candidate."

Blank on firing Quinn, Dimitroff: ‘This is not just a response to 0-5’

Morris is in his sixth season with the Falcons and his first as defensive coordinator. His previous experience as a head coach helped him earn the support of Blank and team president Rich McKay as the choice to lead the team the remainder of the season.

The Falcons fired Dan Quinn on Sunday night, hours after the team fell to 0-5 for the first time since 1997 with a 23-16 loss to the Carolina Panthers. Blank also fired longtime general manager Thomas Dimitroff.

"This is not just a response to 0-5," Blank said Monday, referring to the Falcons' 14-23 record under Quinn since the beginning of the 2018 season.

Blank said Quinn and Dimitroff agreed there was a mandate to make the playoffs "or bust" this season following consecutive 7-9 finishes the last two years.

"It's pretty clear when you go 0-5 that is not going to happen," Blank said. "We felt we had given both gentlemen a long period of time to create the winning environment ... and they both hadn't done it. It was the right decision at this point, we think."

When firing Quinn and Dimitroff, the Falcons announced McKay would take control of football operations on an interim basis and also assist Blank in the search for a full-time coach and general manager.

McKay and Blank said it may not be necessary to hire the GM before the coach. They said decisions about the future direction of the team, including veterans, would be made by the new hires.

"This will not be a situation where we're going to predetermine the roster for the next coach or general manager," McKay said.

Morris will decide if he will select a new defensive coordinator or retain those duties.

Asked about what direction he seeks from a new coach and GM, Blank said "It's called winning. ... I think we need to win." 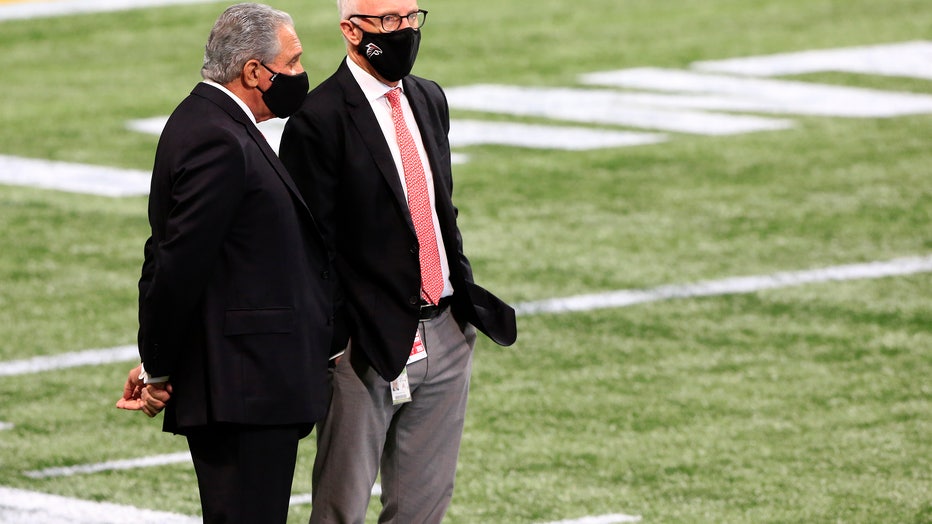 Morris could become a candidate for the full-time job if the Falcons, who play at Minnesota on Sunday, can revive their season. Blank noted 11 games provides an unusually long opportunity for an interim coach to make his mark.

"This is, I think, to Raheem's advantage," Blank said. "I know his aspiration is to be a head coach again. I think in 11 games he'll have a chance to show his own capabilities and I think he's looking forward to that."

Morris was 17-31 as coach of the Tampa Bay Buccaneers from 2009-2011. His team finished 10-6 in 2010, marking the best turnaround in franchise history following a 3-13 finish in 2009. He was the choice as interim coach despite being in charge of a defense which ranks near the bottom of the league in passing, total yards and points allowed.

Morris opened the 2019 season with Atlanta's wide receivers before being switched to the secondary. The move was seen as a major reason Atlanta went 6-2 in its final eight games.

"A lot of the change he was the catalyst for," Blank said. "We'll see if he'll be able to do that this year."

The Falcons can lean more on their running game, which gained 166 yards for a robust 6.6 average. Todd Gurley, who finished with 121 yards on just 14 carries, had success breaking tackles and running on the perimeter.

The defense gave up too many big plays, nine of which covered at least 15 yards and included a 57-yard touchdown pass from Teddy Bridgewater to D.J. Moore. The Falcons had no answer on Carolina's last drive, which consumed 7:39 and ended with a field goal.

A week after getting shut out for no catches, Calvin Ridley was back to his old self, finishing with eight receptions for 138 yards. Five of his catches covered at least 17 yards.

Ryan has gone more than 30 consecutive series without throwing a touchdown pass, a streak he could've snapped by putting a lighter touch on a third-down pass to Hayden Hurst in the end zone early in the fourth quarter. Ryan's interception later in the game was devastating. He threw into coverage and gave slot receiver Russell Gage no chance to make a play.

Star receiver Julio Jones missed another game with an injured hamstring and has played just one half of the last three games. Jones will try to practice this week. ... Defensive end Takk McKinley left with a groin injury in the first quarter and didn't return.

0 -- Zero sacks. The Falcons, who last season ranked second worst in sacks, have just one over their last five halves, and it came in the lopsided loss at Green Bay last Monday.

The team will try to regroup before it travels to Minnesota to face the Vikings (1-4). Morris must boost morale and get players to pay closer attention to detail as the Falcons attempt to turn the season around.