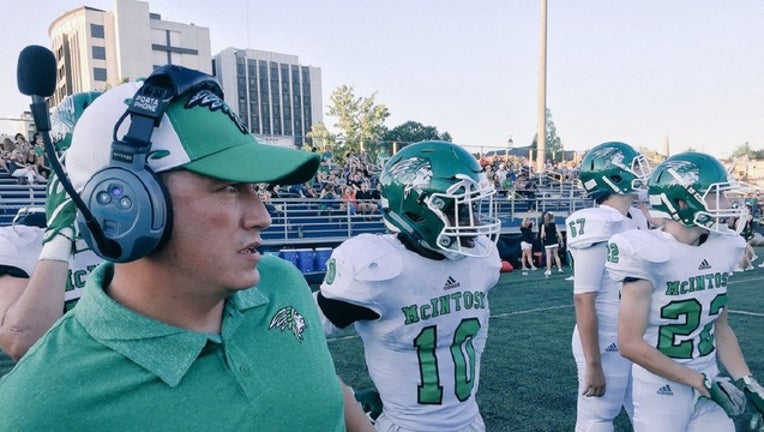 ATLANTA - Can you believe it? It's already time for HIGH 5 Sports! Soon the weather will turn cooler, the days will be getting shorter, and everything will taste of pumpkin spice.

But before that happens, north Georgia turns up the heat on the north Georgia gridiron and for those who waited nine months for the best in high school football, they won't be disappointed!

Here's a recap of the Big Show from Week One:

First up, it's the first Play of the Night of the season was in the Battle of the Wolverines: Woodstock at West Forsyth.

Not a bad play for the first week of action, right?

HIGH 5 Sports is gathering the action from all angles.

That was caught as part of the weekly Friday Night Heights segment.

Well, it doesn't end there!

Let's get cranking with the defending AAA Champions, the Cedar Grow Saints playing the Stephenson Jaguars at Hallford Stadium.

It was a good AAAAA opener for the McIntosh Chiefs who were visiting the Decatur Bulldogs.

The Lithonia Bulldogs came to do battle against the Carver-Atlanta Panthers.

The 680 The Fan Call of the Week with Carl Werl and Brandon Joseph was a good one this week. It was between two-time defending AAAA Champion Cartersville at Allatoona to face the Bucs. And as always photojournalist Eli Jordan delivered the #INYOURFACE pictures.

The Rockdale County Bulldogs were at Berkmar to face the Patriots.

Parkview at The Ridge

Parkview came to play in the Lion’s Den against Peachtree Ridge.

More Lions to face down, this time at Lovett as the state AAA runner-up last season, the GAC Spartans, look set their eyes on another winning season.

Some folks reach for new heights, the HIGH 5 Sports Team actually achieves them. Friday Night Heights had two stops with the first one in Milton as the Eagles hosted the Alpharetta Raiders.

SKYFOX 5 then flew up to West Forsyth for a battle between Wolverines as Woodstock paid a visit.

- Bass picked off by Cade Vela--

The mighty, mighty Blessed Trinity Titans started their season on the road at Westminster.

Rockmart at Cedartown – Game of the Week

HIGH 5’s Bill Hartman headed to probably one of the most heated rivalries around for this week’s Game of the Week.

Twelve Oaks Stadium was the site of the battle between the Lovejoy Wildcats and the Indians of East Coweta.

Newnan at Carrollton – Mic’D Up

Newnan Head Coach Chip Walker got stuck with the wire this week.

Formerly a multiple state champion winner at Sandy Creek, Walker had some work to do following the Cougars first game against Carrollton.

Take a listen to how this game went down.

And you know that the HIGH 5 Sports Team always has some hidden magic. This week their extra game was from just south of metro Atlanta.

The final score was Callaway 26 to 0!