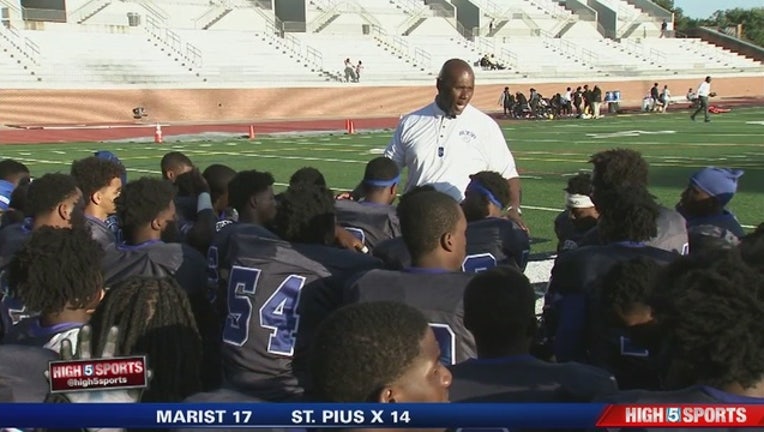 ATLANTA - As the threat from Irma loomed for Florida and Georgia on Friday, we paused to celebrate the last bit of nice weather we'll see in a hot minute with some high school football.

The show went on despite some teams canceling their games ahead of the impact of Irma.

Here is the recap from the Big Show from Week Four:

Play of the Week

First up, it's the first Play of the Night. It comes from the Griffin-Upson Lee game.

Griffin’s Avious Nelson goes deep to Terrell Jester who hauls it in for the 50-yard touchdown.

More highlights from that came later.

Okay, let's get started with a former HIGH 5 Sports Team of the Week, the North Atlanta Warriors visiting Dunwoody.

To Lakewood we go. Undefeated McNair and winless Therrell.

Somebody getting their first win Friday night at Adams Stadium in DeKalb. Druid Hills and Lakeside.

North Gwinnett at Norcross - Call of the Week

Time now for our HIGH 5 Sports Call of the Week. Our Photographer Chris Rosenthal matching the pictures of Norcross and North Gwinnett to the words of 680 The Fan’s Chris Mooneyham and Doug Konkel.

Northside-Warner Robins coming up from Middle Georgia to take on Lanier. The Eagles ranked 6th in Class 6A.

They say the eye in the sky doesn't lie. So, let's see some truth bombs from Madison. Morgan County hosting Oconee County and SKYFOX 5 peeking in.

Let's head back down to the Bunker now where Justin Felder has our Mic'D Up segment which featured some extracurriculars.

How about our HIGH 5 Sports Team of the Week, the Meadowcreek Mustangs. 2-0 for the first time since the early 90's. They were hosting Forsyth Central  Friday night.

Cambridge at the Hooch

When one is coming off the sidelines into a big role like Cody Chaffins was Friday night, he depends on veterans to carry some of that load and who better than our man who has been there and done that. Bill Hartman. He and Super Blaine have our game of the week!

These highlights just in from Moultrie, a 7A top 10 showdown. Roswell ranked 9th and Colquitt County ranked second!

To Cobb County now where the Campbell Spartans are coming off a win. For the first time in a long time. Visiting the Sprayberry Yellow Jackets.

We love the Callaway moms. Cheering on their Cavaliers Friday night as they host Columbus. Nobody has scored on Callaway all year!

It was a big time showdown down in Thomaston where Upson-Lee and Griffin both tried to stay undefeated.