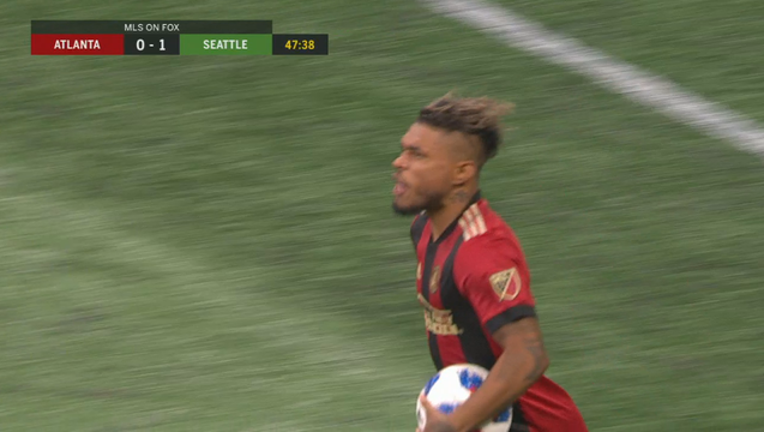 ATLANTA - After tens of thousands of fans came to Mercedes Benz Stadium to watch the finale of the World Cup, thousands more packed the stadium to set another MLS attendance record.

They watched hometown Atlanta United play to a 1-1 draw with Seattle Sounders FC on Sunday afternoon.

Atlanta, which is in first place in the MLS Eastern Division, now owns the top-five most-attended matches in MLS history. Josef Martinez scored his league-leading 19th goal of the season while Julian Gressel picked up his eighth assist.

“I’m calm with the production of the team today,” head coach Tata Martino said. “It’s difficult to play against a defense that sits so far back and just plays very defensively. It’s difficult to break that defense down. I thought we did it pretty well at times, especially in the second half. But it’s hard to do. The only thing I would say, and it’s not worrisome, but something we could work on is to have somebody other than Josef [Martinez] in and around the box who’s able to score goals for us. We need to try to have more guys in goal scoring positions.”

Late in the first half, Seattle opened the scoring after video review overturned a call on the field and awarded the Sounders a penalty. Franco Escobar was ruled on a handball from Harrison Shipp’s shot attempt. On the ensuing attempt, Nicolas Lodeiro stepped up to the spot, and despite Brad Guzan correctly guessing to his left, Lodeiro had just enough on his shot to get the ball into the back of the net.

Atlanta quickly equalized out of the break with Martinez heading home a cross from Gressel in the 48th minute. The German midfielder floated a cross toward the center of the box where Martinez outjumped a pair of Seattle defenders and redirected the ball toward the far post, leaving Stefan Frei no chance to make a save.

After Jordan McCrary was shown a second yellow and sent off in the 63rd minute, Atlanta poured heavy pressure over the final half-hour. While heavily out-possessing Seattle, Atlanta had a few opportunities for the go-ahead goal highlighted from a 70th minute corner kick. Leandro Gonzalez Pirez headed an attempt off the crossbar, while the rebound landed at Chris McCann’s feet inside the six-yard box, but his rushed attempt was saved by Frei.