BRISTOL, Tenn. - Brad Keselowski inherited his second win of the season when Chase Elliott and Joey Logano collided as they raced for the victory Sunday at Bristol Motor Speedway.

Keselowski was in third with a lap and a turn remaining when he lucked into his second victory in three Cup races. Logano had cleared Elliott for the lead with three laps remaining, but Elliott was stalking him while seeking his second win in three days. 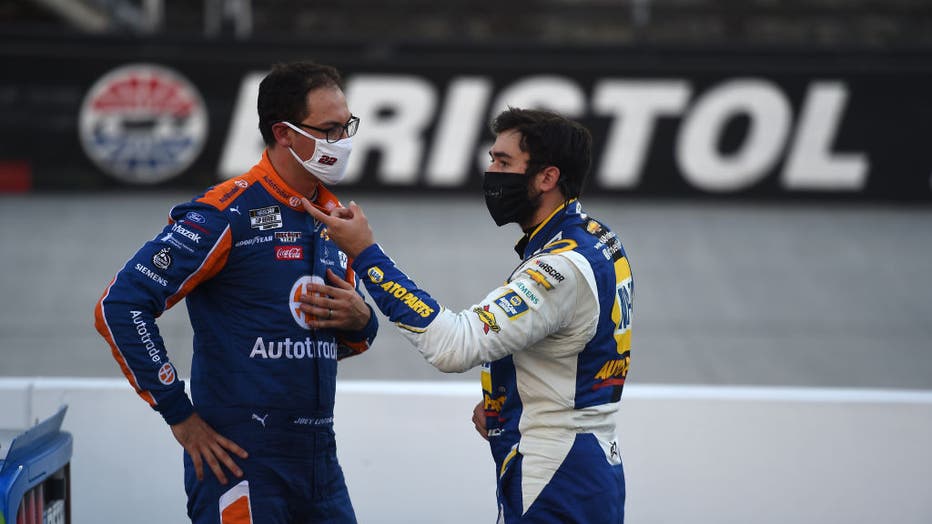 They made contact in the fourth turn and drifted into the wall as Keselowski slid past with a lap remaining. He had just one trip around the .533-mile concrete bullring to close the victory.

Keselowski, in a contract year with Team Penske, got his first victory of the season last Sunday in the Coca-Cola 600. Elliott was roughly two laps away from the win when a caution flew and Keselowski inherited the lead when Elliott pitted.

Keselowski held on for that victory at Elliott's expense and now is the first driver to win multiple races in the five Cup events since NASCAR resumed May 17.

"There's so much going on in the world, I am just thankful I get to be a race car driver and do this," Keselowski said after giving Ford its third win in five races.

Logano finished 21st and Elliott was 22nd. Logano stared Elliott down as the two climbed from their cars but Elliott never looked in his direction. After Logano had retrieved his mandatory face mask, he approached Elliott for a brief conversation.

Elliott did take the blame after the talk.

"Awww, just going for the win," Elliott said. "I'll certainly take the blame. I just got loose and got into him."

Clint Bowyer was second for his best finish in a year and a 1-2 finish for Ford, while Jimmie Johnson was third in a Chevrolet. Kyle Busch and Erik Jones rounded out the top-five in a pair of Toyota's for Joe Gibbs Racing.

Ryan Blaney had a strong car early and led 60 laps but crashed while chasing teammate Keselowski for the lead in the second stage. Blaney seemed to get too high on the track, wiggled into the wall and then was hit by Ty Dillon.

Blaney went to Bristol coming off back-to-back third-place finishes but wound up last.

"I didn't think I was that high and all of a sudden I hit a slick spot," Blaney said. "I thought we were going to be OK and then we got destroyed about six seconds later. That's just Bristol."

It was another rough race for Ricky Stenhouse Jr., who rebounded from three poor finishes with a fourth-place Thursday night at Charlotte. He was running decently near the end of the stage until contact from Johnson triggered a multi-car accident and knocked four drivers, Stenhouse included, out of the race.

"We just got crashed," said Stenhouse, who wrecked on the first lap of NASCAR's first race back. "It was a bummer. I felt like we had a really good shot at racing them for the win."