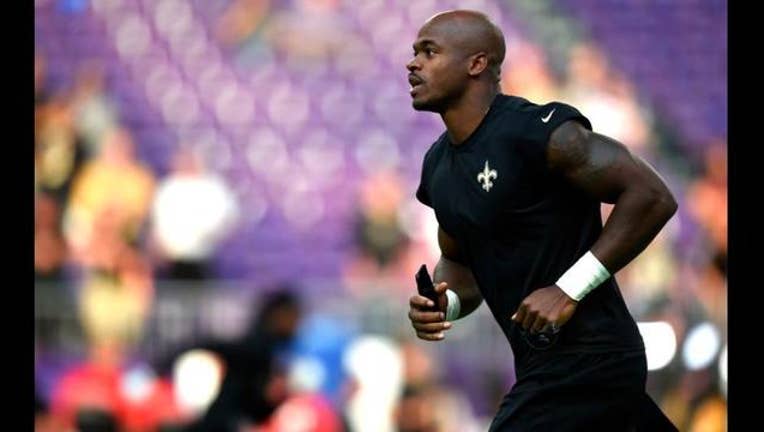 Adrian Peterson warms up before the game against the Minnesota Vikings on September 11, 2017 at U.S. Bank Stadium in Minneapolis, Minnesota. (Photo by Hannah Foslien/Getty Images)

(KMSP) - Adrian Peterson’s tenure with the New Orleans Saints is over after just four games and 27 rushing attempts. The Saints have traded Peterson to the Arizona Cardinals. The Saints will receive a conditional draft pick from Arizona.

"We are always on the lookout for opportunities to improve our team and we look at this as one of those opportunities,” Cardinals general manager Steve Keim said in a statement. “What Adrian has accomplished in this league is well-established. Our need for a spark in our running game right now is also obvious and we are excited to give him the chance to provide that.”

Peterson spent the first 10 years of his career with the Minnesota Vikings, where he won three rushing titles and was named MVP in 2012. It seemed like Peterson would never wear anything but purple, but the running back signed a two-year contract with New Orleans this season, and faced his former Vikings teammates in a Monday night season opener in Minnesota. The Vikings do not face the Cardinals this season, so  another matchup with Peterson appears unlikely.

Arizona has failed to rush for 100 yards in any game this season, losing star running back David Johnson to a wrist injury in the season openers against the Detroit Lions.

Peterson has had a disappointing start to the 2017 season, with just 81 yards on 27 carries and no touchdowns for the Saints. The Saints have opted to use Mark Ingram as their primary running back and rookie running back Alvin Kamara as a change-of-pace runner and pass catcher.