MELBOURNE, Australia - Just about every baseball fan in the United States knows about Atlanta Braves star Ronald Acuña, Jr. Before he was an Atlanta icon, however, Acuña was a wizard in "Oz."

Deeble is on the coaching staff for the Melbourne Aces of the Australian Baseball League -- and in 2016, his club included a teenage star sent "Down Under" to get some extra experience.

After missing part of his 2016 minor league season due to injury, the Atlanta Braves sent then 18-year-old Ronald Acuña, Jr. to the Melbourne Stars, a team they had a relationship with.

Acuña played just 20 games for the Aces, but left his mark: he hit .375 at the plate, showed off a strong arm playing right field, and had his trademark confidence. Deeble remembers one game in particular against the Adelaide Giants: it was windy and both teams struggled to score, the game was tied late, with Acuña standing on third base.

"He looked over to me, I didn't speak Spanish, he doesn't speak English, he was ... doing this sort of thing," said Deeble, pantomiming a head gesture Acuña was giving him. "I was like [I don't know what you're saying] ... well the next thing, he steals home, and we win."

Along with confidence on the field came the personality Braves fans have gotten to know over his first three Major League seasons.

"Every time you saw him he was dancing," said Deeble. "Out here we don't have a whole lot of Latin music, but every time you were around him he'd have the music blaring. He was teaching guys to dance, all the Latin moves. Everyone loved him."

Deeble says, however, his teenage charge did not treat his time in Australia like a beach vacation. Rather, as an 18-year-old who turned 19 during the season, he was a role model for his older teammates.

"I think he just had this ... you can see the look in their eye, he wanted to play and he led from the front," said Deeble. 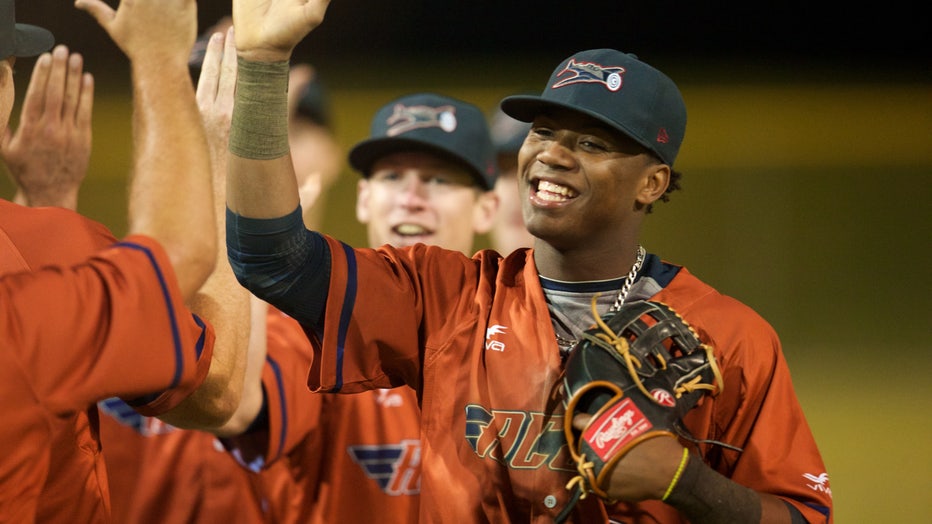 Acuña's legacy in Australia has lasted. While the league has hosted its share of players who've gone on to successful MLB careers, an ascendant talent like Acuña is rare.

Acuña is still a point of pride for the league. A couple of seasons ago when Miami Marlins pitchers hit Acuña with one too many fastballs, the Australian Baseball League jokingly "renamed" themselves the Acuña Baseball League temporarily. The Melbourne Aces offer Acuña replica jerseys for sale on their website (which, they point out, are available to be shipped to any interested Braves fans stateside).

"You go to our games now, half the stadium's full of Ronald Acuña jerseys with his name on the back," said Deeble. "He was a special character. It was only 20 games he played for us, but he's part of the family here."