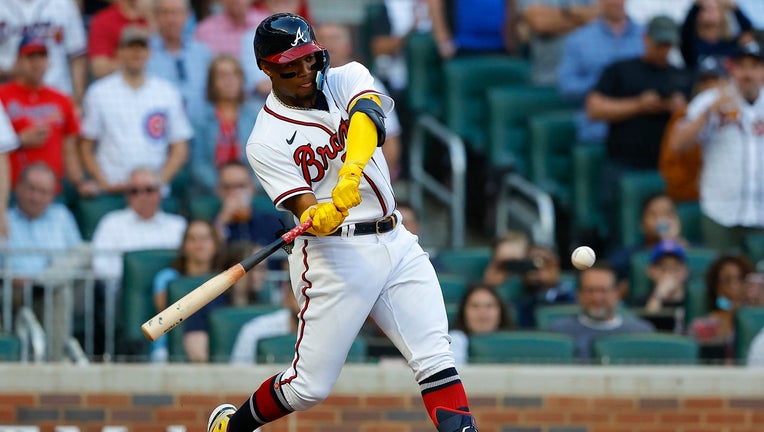 Ronald Acuna Jr. #13 of the Atlanta Braves bats during the first inning of an MLB game against the Chicago Cubs at Truist Park on April 28, 2022 in Atlanta, Georgia. (Photo by Todd Kirkland/Getty Images)

ATLANTA - Ronald Acuna Jr. went 1 for 5 with two stolen bases in his return to the Braves lineup and Kyle Wright turned in another stellar performance, giving Atlanta its first series win of the season with a 5-1 victory over the Chicago Cubs on Thursday night.

Wright (3-0) pitched three-hit ball over a career-high seven innings as the World Series champion Braves, off to a sluggish start, made it two of three over the Cubs.

Austin Riley and Dansby Swanson hit solo homers off former Braves pitcher Drew Smyly (1-2), while Adam Duvall provided some insurance with a two-run shot against Ethan Roberts in the eighth.

Wearing sparkly, gold-topped cleats with matching armbands and batting gloves, Acuna grounded out twice, struck out twice and punched an opposite-field single to right in the seventh.

A pair of stolen bases seemed to back up his pregame assessment that his reconstructed right knee actually made him faster than before the ACL was torn last July. Playing right field, Acuna fielded the carom perfectly on Jason Heyward's liner off the fence, holding him to a single.

While much of the attention was on Acuna rejoining the Braves, it was Wright who starred again.

He has pitched 24 innings over his first four starts, allowing just 14 hits and three runs for an ERA of 1.13. In a sign of how nasty his stuff is, Wright has recorded 34 strikeouts with just six walks -- four of those coming against the Cubs. He also hit a batter but benefitted from a couple of double plays while allowing only one runner past second base.

Wright looked like a first-round bust as he struggled to gain a foothold in the majors over the last four seasons. Bouncing up and down between the majors and minors, he combined to go 2-8 with a 6.56 ERA over 21 appearances.

Finally, the talented right-hander seems to have figured things out. Coming off a career-best 11 strikeouts against the Marlins, he rang up eight more Chicago hitters.

The Cubs scored their lone run in the second without picking up a hit, taking advantage of Wright walking the first two hitters.

With runners at first and third and two outs, Nico Hoerner appeared to have made a baserunning blunder when he was caught off first by a pickoff throw from Wright.

But the rundown went on long enough for Alfonso Rivas to sprint home from third before Hoerner was tagged out.

The Braves placed catcher Manny Pina on the 10-day injured list, retroactive to Monday, with left wrist inflammation. William Contreras was recalled from Triple-A Gwinnett to serve as the backup behind Travis d'Arnaud. The move came just in time for Contreras to be reunited with older brother Willson Contreras, the Cubs' starting catcher. Before the game, the brothers carried out the lineup cards to home plate, gave each other a hug and posed for pictures.