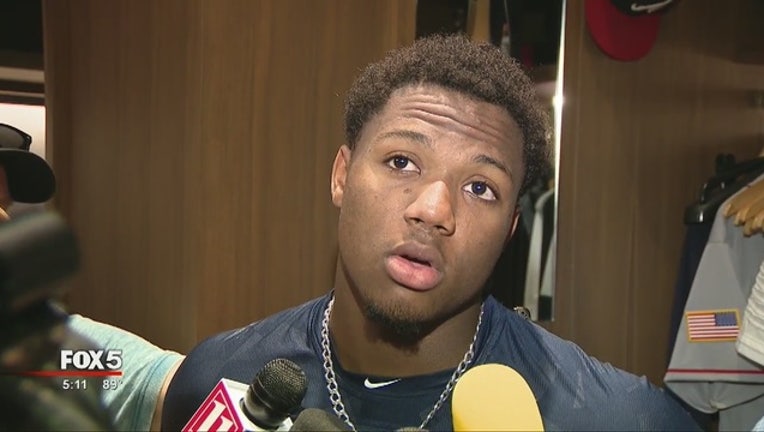 PHILADELPHIA (AP) - Losing Nick Markakis to injury left the Atlanta Braves in a somber mood after a big win.

But the team might be without Markakis for a while because he got hit on the left wrist with a pitch in the sixth inning. Markakis wore a splint on his arm after the victory and will see a doctor on Saturday.

The veteran right fielder hasn't been on the injury list in his five seasons with the Braves and has played at least 155 games in 11 of his first 13 seasons in the majors.

"He's been a constant for us," Freddie Freeman said. "We're hoping for a miracle. It put a damper on tonight."

Mike Soroka gave up one run and eight hits in 4 2/3 innings but was removed with the bases loaded and a 5-1 lead. Sean Newcomb (4-1) earned the win by retiring J.T. Realmuto on a soft grounder to end the inning.

"I understood completely," Soroka said about leaving the game. "I threw 37 pitches in the inning. I had full confidence in (the bullpen)."

The NL East-leading Braves had lost six of eight before their first win in Philadelphia in six games, dating to last season.

The Phillies fell 6 1/2 games behind Atlanta, but are right in the mix for a wild card with the trade deadline coming up next week.

"The movement, the action, the velocity the first four were as good as it's been all year," Arrieta said. "Things compounded quickly in the fifth."

McCann ignited a four-run fifth with a towering homer into the second deck in right field. Johan Camargo reached on third baseman Maikel Franco's error and Ender Inciarte walked. They advanced on Soroka's sacrifice and scored on Acuña's two-run single to center. Ozzie Albies lined an RBI double to right to make it 5-0.

The Braves scored another four runs in the sixth off Cole Irvin despite getting only one hit. Irvin hit one batter and walked three, including two men with the bases loaded.

Phillies manager Gabe Kapler kept Irvin in the game to bat with two runners on and one out in the bottom half. Fans booed after the pitcher flied out to left.

"If the bases were loaded with no outs, we would have used (Sean) Rodriguez," Phillies manager Gabe Kapler said, defending his decision not to use a pinch hitter.

The Phillies had runners at first and third with two outs in the third, but Bryce Harper popped out. They had the same situation with one out in the fourth, but Franco grounded into a double play started by third baseman Josh Donaldson making an excellent backhanded stab.

Acuña extended his on-base streak to 30 games, the longest active streak in the majors.

Newcomb has a 1.42 ERA since moving to the bullpen after returning from Triple-A Gwinnett on May 4.

Braves: SS Dansby Swanson wasn't in the lineup for the second straight game because of a sore heel. Manager Brian Snitker said Swanson could end up on the 10-day injury list. He'll be evaluated on Saturday.

Phillies: LF Jay Bruce could return within 10 days. Bruce has been out with a strained right oblique.