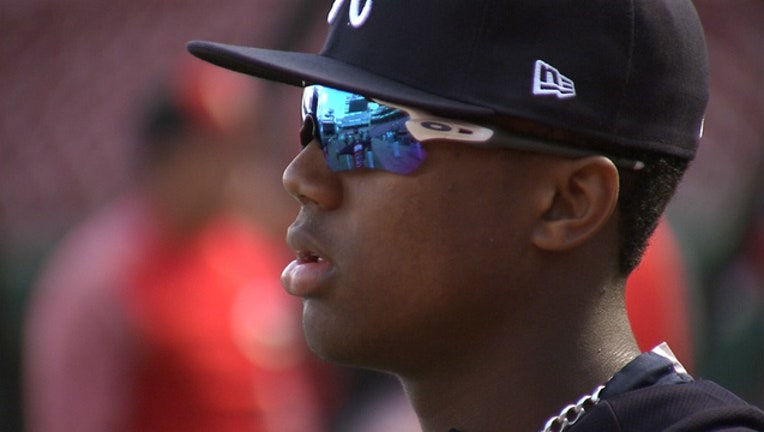 MIAMI (AP) - Ronald Acuña Jr. hit a three-run homer in the ninth inning and Matt Joyce delivered a tiebreaking RBI single in the 12th to help the Atlanta Braves rally past the Miami Marlins 7-6 Sunday.

The Braves overcame a 5-1 deficit in the ninth against closer Sergio Romo. One run came home on a balk, and Acuña tied the score with one out by pulling an 0-1 slider for his 14th homer.

The Braves won their seventh consecutive game in Miami, a record in the series. They swept the Marlins for the 25th time, and for the second time this season.

Both teams scored in the 10th, the Braves thanks to four consecutive two-out walks by Tyler Kinley. Ozzie Albies hit a one-out triple in the 12th off Adam Conley (1-6) and scored on Joyce's third hit of the game.

The clutch hits were a change for the Braves, who began the ninth batting 8 for 58 (.086) with runners in scoring position on their six-game trip.

Braves closer Luke Jackson blew a save in the 10th when Martin Prado hit an RBI double, but the right-hander limited the damage by striking out the next two batters to end the inning.

Dan Winkler (3-1) retired both batters he faced in the 11th. Josh Tomlin, the Braves' eighth pitcher, worked around a one-out single in the 12th for his second save.

Austin Dean had three run-scoring hits for Miami, including a homer to lead off the first inning, and hiked his average from .183 to .219.

Atlanta's Max Fried gave up three runs in six innings. He doubled home the Braves' first run in the third inning, but was out trying to score from third on a one-out grounder to second base.

Pablo Lopez allowed one run in six innings for Miami, lowering his home ERA to 1.78 in six starts this year.

The Braves improved to 47-23 at Marlins Park.

Second baseman Albies saved a run in the fifth. With runners at the corners and two out, he made a running backhanded grab of Brian Anderson's one-hopper up the middle, and whirled and threw to first for the out.

The shift helped Miami hang onto a 3-1 lead in the seventh. The Braves loaded the bases with two out, but when Dansby Swanson hit a line drive up the middle, second baseman Starlin Castro made a diving backhanded catch.

Newly acquired Braves LHP Dallas Keuchel's first tuneup in the minors is now scheduled for Monday with Single-A Rome. His start Saturday for Triple-A Gwinnett was rained out.

Braves: They return home to open a four-game series against the Pittsburgh Pirates on Monday, when RHP Kevin Gausman (2-5, 6.15) is scheduled to start.

Marlins: RHP Sandy Alcantara (3-5, 3.80) is scheduled to start Monday when Miami opens a three-game series at home against St. Louis. The Cardinals are 60-35 in Miami.