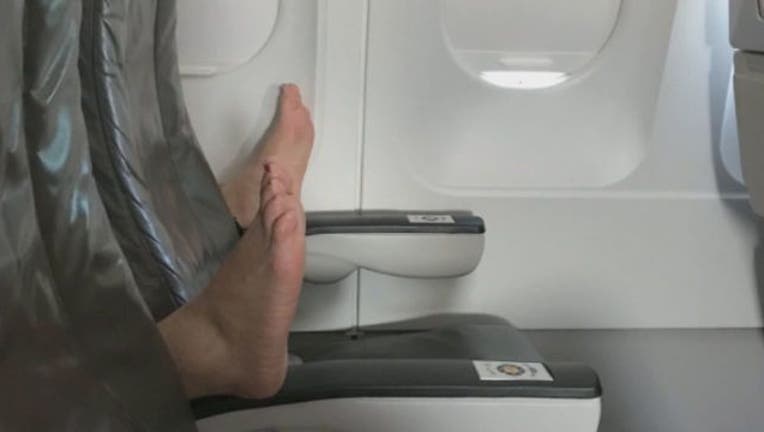 A woman claimed her flight was a "nightmare" thanks to a pair of unwelcomed limbs.

There are certain cardinal rules-- actually, pretty obvious ones-- by which airline passengers all oblige by. But for some, and unfortunately at the expense of fellow travelers, they may not be so obvious.

Like Jessie Char's scaring situation that shook her and the rest of the internet.

It all started when she boarded a JetBlue flight, she thought she'd be enjoying an open three-seater row.

She was so thrilled, she even tweeted a picture of the open space with a caption that read, "My two favorite people to sit with on a plane."

You'd think she had it made, right? Wrong, so very wrong.

Because something totally unexpected happened. But she built a little anticipation first, "You guys will never guess what happened next."

And there it was, straight out of a Wes Craven movie, a pair of feet emerged from the back row! They completely took over the middle seat's arm rests.

"Today, I flew on the set of a nightmare."

But wait, it didn't end there.

Because shortly after the feet made their debut, she posted this chilling tweet that read:

"The left foot reached over and opened a window"

Oh the horror-- that is, if feet aren't your thing.

The internet definitely had some words for Jessie.

"I would have started tickling. Some people, man"

"This is like one of those post credits scenes in a horror movie where it turns out the big bad survived and surprise kills the survivors."

"Happened to me on Gulf Air. Empty row, thrilled. Flight takes off. Man takes of socks, shoes. Lay across seat with his feet almost on my lap."