She said she was never seen during her seven hour wait at an Atlanta area emergency room, but ended getting a bill for hundreds of dollars because of it.

ATLANTA - A woman said she was billed for a trip to the emergency room, even though she didn't receive any treatment.

Taylor Davis said she went to the Emory Decatur Hospital ER in July for a head injury.

She sat in the waiting room for hours, but with no end in sight, she decided to leave.

A couple of weeks later, a surprise came in her mailbox.

It was a bill from the hospital for nearly $700.

"I didn't get my vitals taken, nobody called my name. I wasn't seen at all," Davis said. 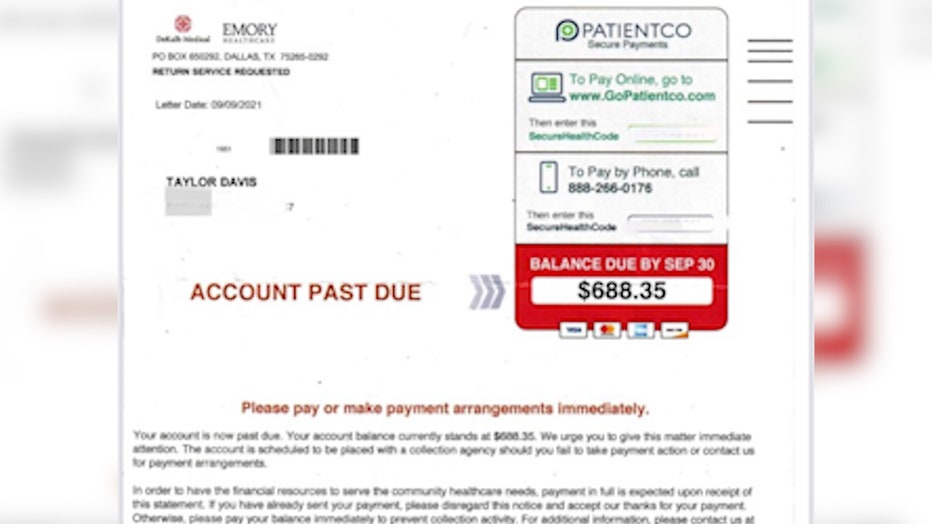 Davis said she was convinced it was a mistake.

"So I called them and she said it's hospital protocol even if you're just walking in and you're not seen. When you type in your social, that's it. You're going to get charged regardless," she said.

She said she was told it was an emergency room visit fee or a facility fee as it is called in some cases.

It's often added to a person's total hospital bill, so it might not be as noticeable as it is in this case.

An email sent to Davis by an Emory Healthcare patient financial services employee states "You get charged before you are seen. Not for being seen."

Davis said unfortunately, she'll think twice before stepping foot in an ER., now that she knows what she can potentially be charged with,

"I'm very reluctant to go to the hospital now. That's kind of like the last resort now. Seeing that they're able to bill you for random things, it doesn't make me want to go. So that's not good," Davis said.

"Emory Healthcare takes all patient concerns seriously and appreciates this has been brought to our attention. Our teams are currently looking into this matter and will follow up directly with the individual."