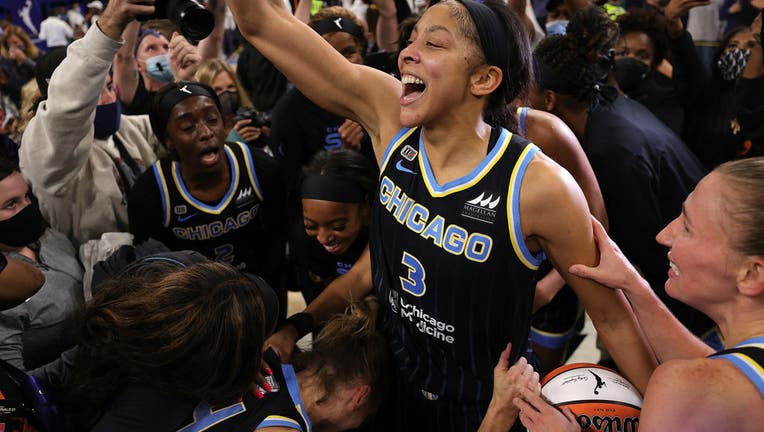 CHICAGO, ILLINOIS - OCTOBER 17: Candace Parker #3 of the Chicago Sky celebrates after defeating the Phoenix Mercury 80-74 in Game Four of the WNBA Finals to win the championship at Wintrust Arena on October 17, 2021 in Chicago, Illinois. (Photo by St

Chicago Sky star Candace Parker paid tribute to Kobe Bryant after she helped the team to the franchise’s first WNBA championship on Sunday.

Parker was captured collecting her thoughts after her hometown team closed out the series against the Phoenix Mercury. She said the moment was a tribute to the late Los Angeles Lakers legend, who famously posed with the Larry O’Brien Trophy in the locker room after winning his second title.

"I think Kobe and Gigi have meant so much to our league," Parker said, via Yahoo Sports. "So the advice I got from Vanessa before the game was, ‘Play Gigi’s way.’ And I think we’ve done that. We did that all playoffs. And so I just want to acknowledge [Kobe’s] contribution."

Parker revealed the Bryants were on the Sky’s mind during the game.

"[Vanessa] said, if Gigi could play, she would play as hard as she could. So I think that that was huge in our team and just us overcoming everything that came today. So thank you Vanessa. We love you Gigi, we love you Kobe," she added.

Vanessa Bryant was cheering for Parker and the Sky. She confirmed that Parker asked for a "Kobeism."

"You asked me for another ‘Kobeism’ this morning and I asked you to play Gigi’s way if she was given this opportunity. You played Gigi’s Way!" Bryant wrote in an Instagram post.

Parker hit a three-pointer to tie the game at 72 with 1:57 remaining. She was in tears talking with ESPN’s Holly Rowe as she discussed bringing a championship to Chicago.

"Everything that this team went through the entire year prepared us for this," Parker said. "We were down nine, we were down 11, we just gotta stay with it, and that’s what we’ve done all season. I’m so proud of this group. I’m so proud of this group with our fight, next man up mentality. I mean [Stefanie Dolson] coming in and having those layups. [Courtney Vanderslooot] doing what she does all year, I mean [Allie Quigley]. … It’s amazing."

Parker, who signed with the Sky in the offseason after spending 13 seasons with the Los Angeles Sparks, finished with 16 points, 13 rebounds, five assists and four steals.