ATLANTA - Players in the WNBA generated a flurry of tweets Tuesday evening when they showed up to play games sporting black T-shirts that read "Vote Warnock."

Rev. Raphael Warnock, D-Georgia, is one of several candidates challenging Republican Sen. Kelly Loeffler in a special election in November.

"We just wanted to support someone whose beliefs were in line with ours," explained Chicago Sky forward Gabby Williams.

Loeffler, the co-owner of the Atlanta Dream, has been an outspoken critic of the WNBA's decision to promote "Black Lives Matter" this season. Last month, she wrote a letter to the league's commissioner urging them to put American flags on the team's warm-ups instead.

“The truth is, we need less - not more politics in sports. In a time when polarizing politics is as divisive as ever, sports has the power to be a unifying antidote,” Loeffler wrote in June. “And now more than ever, we should be united in our goal to remove politics from sports.”

Warnock said he was "honored and humbled" by the players' support.

"This movement gives us the opportunity to fight for what we believe in, and I stand by all athletes promoting social justice on and off the court," Warnock tweeted Tuesday night.

Elizabeth Williams with the Atlanta Dream said the shirts were an "intentional" and player-driven move.

"Nobody was forced to wear the shirts. It wasn't, like, mandatory, but there is also power in the unity of it," said Williams. "At the end of the day, we're still citizens. We are still able to vote. Our voice is just as important as anyone else's. You know, I am a registered voter in Georgia specifically, which isn't the case for all players, obviously, but being in that unique position, we still have as big a voice as anyone else regardless of our job description." 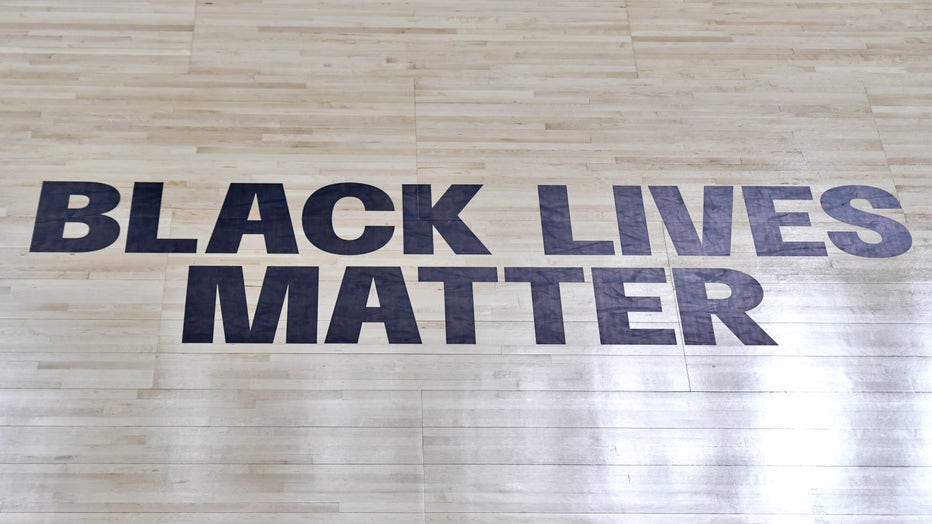 A Black Lives Matter graphic on the court during a game between the Atlanta Dream and the Las Vegas Aces at Feld Entertainment Center on July 29, 2020 in Palmetto, Florida. (Photo by Julio Aguilar/Getty Images)

Loeffler, however, stands by her assertion that politics do not belong in the WNBA.

"This is just more proof that the out of control cancel culture wants to shut out anyone who disagrees with them," Loeffler said in a statement. "It’s clear that the league is more concerned with playing politics than basketball, and I stand by what I wrote in June: we come together around sports, but promoting a political agenda divides us rather than unites us."

The WNBA is 80 percent black and Gabby Williams said she and her colleagues have a different outlook.

"She's you know, a cisgendered, upper-class, white woman. So, for her, this is maybe just politics. For us, this is our livelihood and this is who we are. So there's no separating our blackness from sports," Williams explained.

The players said they will continue to use their platform to promote social justice and the "Vote Warnock" T-shirts could also make another appearance before the season ends.