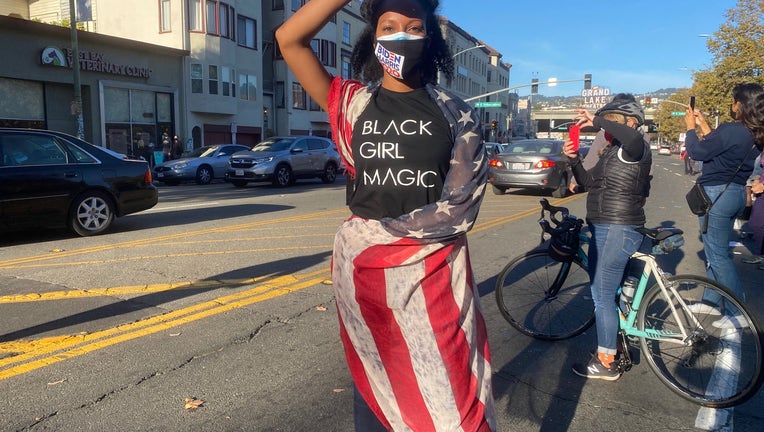 Lia Ballard of Oakland said she was wrapped in an American flag because now she feels safe. Photo: Lisa Fernandez Nov. 7, 2020

OAKLAND, Calif. - Minutes after the country learned that Joe Biden and Kamala Harris won enough electoral votes to win the White House, hordes of supporters took to the streets, many wrapped in, or waving, an unfamiliar sight.

Liberals came out proudly on Saturday, many saying they hadn't touched the patriotic symbol during Donald Trump's presidency or at any point in their lives. For them, the red, white and blue had come to represent the worst tendencies of their fellow Americans, like xenophobia.

But almost immediately, the symbolism of the flag changed with the Democratic victory.  At Lake Merritt in Oakland, blocks away from where Harris was born at the Kaiser Permanente hospital, the streets were flanked with stars and stripes.

Allison Sieber said she was "reclaiming" the American flag, carrying one that said "Nation of Immigrants," which she affixed next to a rainbow LGBTQ banner and rode with them both whipping in the wind on her bicycle. She said she hasn't pulled out the American flag during the entire Trump presidency.

“I don’t want it only to be associated with intolerance,” she said. “America has wonderful values.”

Lee Barken waved a big flag from the roof of his SUV.

And Lia Ballard, a young woman wearing a "Black Girl Magic" T-shirt, wrapped herself in the flag, pumping her fist on Grand Avenue along with crowds of people cheering at the new presidential administration; one that has openly championed the Black community.

“I feel safer," she said about why she was draped in Old Glory.

And it wasn't just in Oakland. 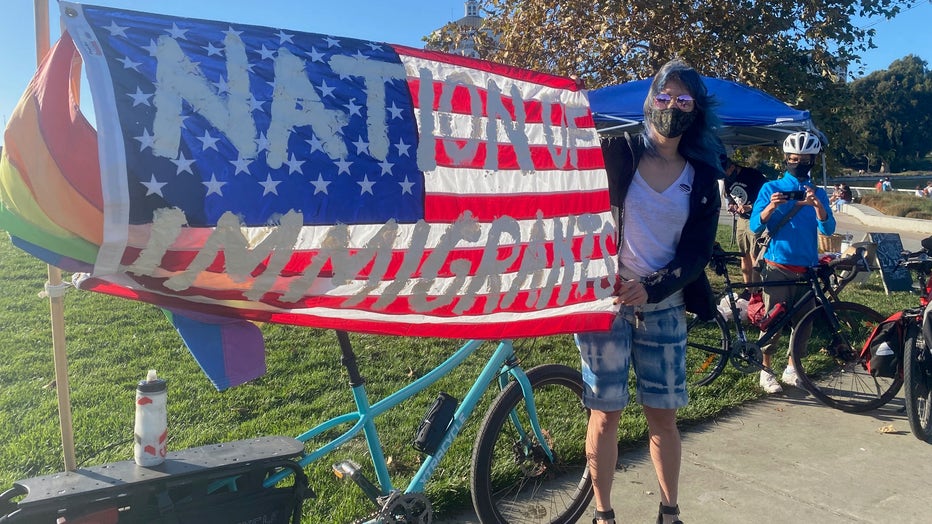 Allison Sieber is reclaiming the American flag. “I don’t want it only to be associated with intolerance,” she said. “America has wonderful values.” Photo: Lisa Fernandez Nov. 7, 2020

The American flag popped up at impromptu parades throughout the country. The Empire State Building in New York lit up with America's colors. And the flags were a hallmark of the Biden-Harris speech on Saturday night in the Riverfront district of Wilmington. Flags were seen on many pickup trucks, but many on social media noted the "tenor" was different.

Retired wrestler Kevin Nash tweeted: "It's truly amazing how different the optic alone of our American flag has today. Once again it represents the UNITED STATES OF AMERICA!"

Singer and actress Grey DeLise-Griffin tweeted: "This is the first day I haven’t cringed at seeing The American Flag!" 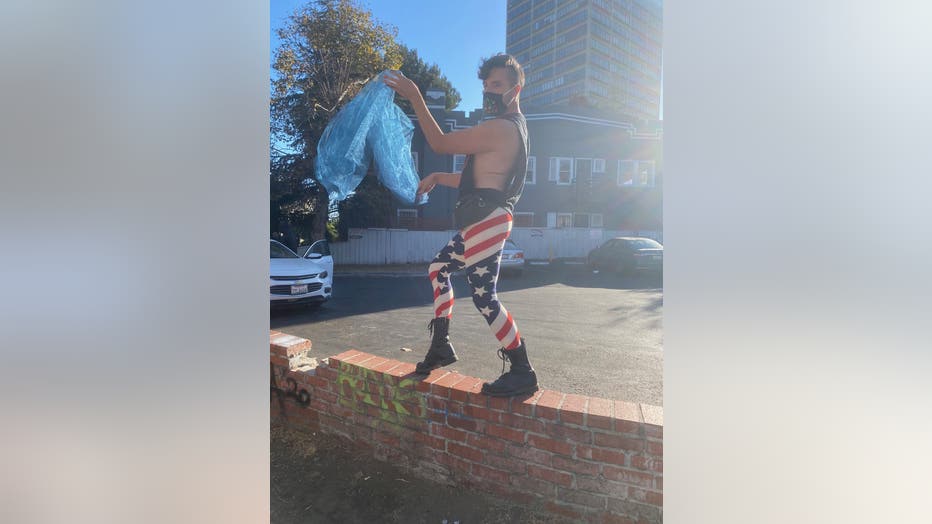 According to a 2018 Pew Research poll, Republicans were twice as likely as Democrats to believe that it’s important to fly an American flag.

Colin Kaepernick's well-known refusal to stand for the flag while the national anthem was sung at NFL games more than four years ago perhaps also contributed to an aversion to the stars and stripes among people on the left. To Kaepernick and his supporters, the flag has represented America's long history of racial injustice and police brutality.

The flag has held a completely different meaning for those on the other side of the aisle, especially during President Trump's presidency: Patriotism. Trump himself literally embraced an American flag in February when he hugged and kissed one onstage at the Conservative Political Action Conference, saying “I love you, baby.”

The American flag has been a mainstay at Trump rallies throughout the country.

Last weekend, for example, many Trump supporters rode through Marin City waving American flags. The Republican organizers said they were just celebrating what they hoped would be a Trump win. But many community members said they felt intimidated by they're presence.

This weekend, Democrats also put their own spin on the flag.

On Saturday, a group of liberals rode around the Bay Area with "Protect Democracy" signs on their cars, waving American flags with peace signs in the corner, instead of the standard blue and white stars.

Dave Davila decided to go bold and just wear red-white-and-blue Spandex, as he danced in Oakland to celebrate his feelings. He said for the first time in a long time, he felt proud to be from the United States and show it to the world.

"I'm wearing these again," he said, "because he said no political party owns the American flag."