Waitress gets $1,300 tip after cancer battle

A group of 13 women gave a Wisconsin waitress a $1,300 trip after she battled cancer alongside her sister, who lost her fight with the disease in October.

UNION GROVE, Wis. - A group of women in Wisconsin surprised a waitress, a cancer survivor who had lost her sister to the disease in October, with a $1,300 tip for Christmas.

Jessica Greb, the founder of Orchestrating Good, a group focusing on performing acts of kindness in the community, told Fox News on Wednesday that a group of 13 women, including herself, gave the generous tip to waitress Michele Bachmann this past weekend.

“About a week prior, a friend shared a story she had seen about a group who had done a similar thing for their server in another state and thought that it was something we should try to do before Christmas,” Greb told Fox News.

“So, a few of my friends and I reached out to our network of friends and knowing it was really close to the holiday we didn’t know how many people would be available a few days before Christmas, but we were able to find 13 of us who could have breakfast together and bless whoever our server was going to be.”

Greb said the group went to Mulberry’s Pancakes and Café in Union Grove, a half-hour drive southwest of Milwaukee, on Sunday and Bachmann happened to be their waitress.

Bachmann recalled, “I put the check down and told them all, 'Merry Christmas, it was a pleasure taking care of them,' and I walked away,” Fox 6 reported.

The women then gave Backmann a Christmas card.“I opened it up, and I see a $100 bill, and I was like, literally shocked,” Bachmann said. 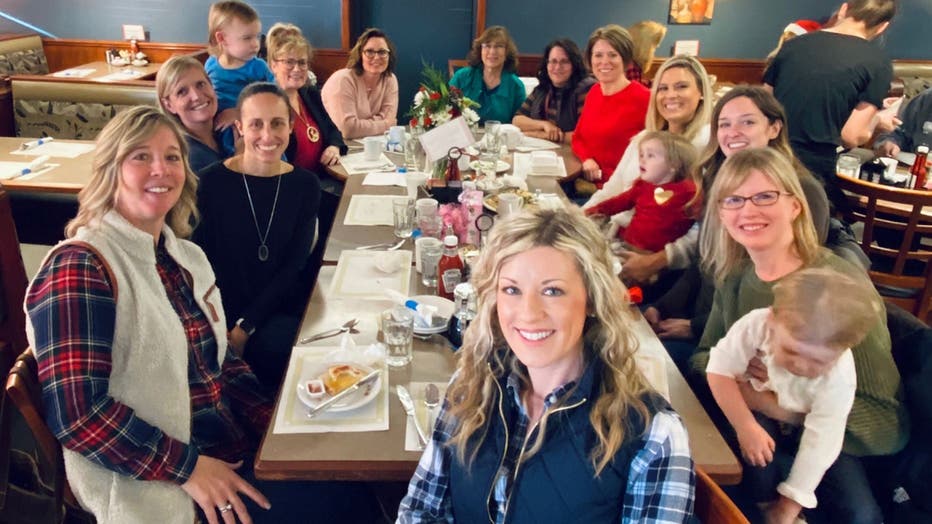 This group of women in Wisconsin surprised waitress Michele Bachmann, a cancer survivor who had lost her sister to the disease in October, with a $1,300 tip for Christmas. (Orchestrating Good)

Greb told Fox News that 13 $100 bills were inside the card. She added that after the group gave Bachmann the card they learned she lost her sister to cancer in October. Bachmann reportedly battled cancer at the same time as her sister.

“As Christmas came, I kind of felt like I had lost a part of me,” Bachmann said. “I think actually, she's up there, and she knew that I was kind of still sad about this, and honestly, I feel like she sent those, she's an angel, and she sent those angels to me.”

“Knowing she struggled, I think for us, us being able to gift her with that was a gift in and of itself to all of us,” Greb told Fox News, adding that she had no idea what Bachmann had been through when the group gave her the $1,300 tip.“It just reminded me about how important it is to treat anyone with kindness because you just don’t know the journey they have been on leading up to the moment you meet them.”

“Thank you all so very much. I’m still speechless,” Bachmann wrote on Orchestrating Good’s Facebook page. “You hear about this but never ever believe it could happen to you. I feel beyond blessed. Thank you so very much and Merry Christmas to all of you.”

Bachmann said she wasn't yet sure how she would spend the money, but said she'd be sure to spread acts of kindness.

“Ever since then, I don't think I've stopped smiling,” Bachmann said.“I wouldn’t wish anybody to have to battle cancer and lose anyone especially this close to the holidays,” Greb said. “So, for her to have been the one that we were able to bless by showing her this act of kindness, hopefully we were able to reignite her spirit and remind her that there is a lot of good in the world.”