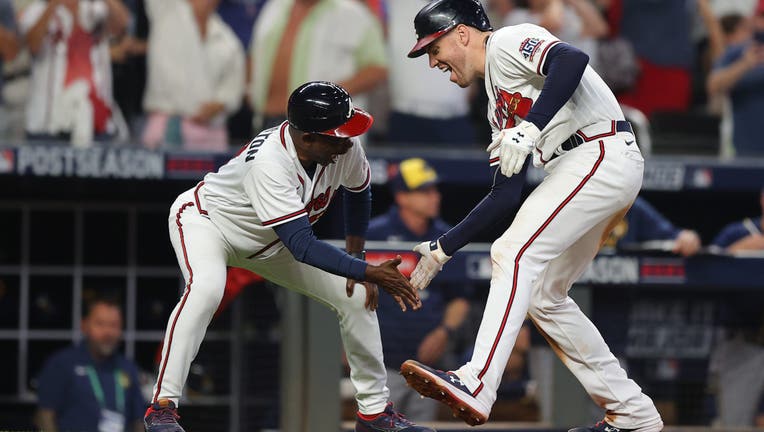 Freddie Freeman #5 of the Atlanta Braves reacts with Ron Washington after hitting a home run during the eighth inning against the Milwaukee Brewers in game four of the National League Division Series at Truist Park on October 12, 2021 in Atlanta, Geo

ATLANTA - Twice in the same game 10 years ago, Ron Washington was within one strike of winning the World Series as a manager. The beloved baseball lifer is now finally getting another shot at a championship.

A decade after that Game 6 loss while guiding the Texas Rangers, Washington is emphatically waving Atlanta Braves runners around third base. There are also the daily fielding drills he does, even before World Series games in late October, with All-Star second baseman Ozzie Albies, Gold Glove first baseman Freddie Freeman and all their infielders.

"I’d just like to win it, and I think if I’ve got that chance to do it, it’s going to be this group," Washington said. "This is my expertise. If I can’t manage, this is the second-best thing that I can do in the game of baseball."

This series is even at a game each after Houston won 7-2 on Wednesday night. The next three games are in Atlanta, starting with Game 3 on Friday night.

Washington’s passion for the game is still unwavering at age 69 after five decades in professional baseball as a player, coach and manager. In 2010 and 2011, he led the Rangers to back-to-back World Series appearances — their only two American League pennants.

Now in his fifth season on manager Brian Snitker’s staff in Atlanta, the third base coach has certainly played a huge part in the Braves returning to the World Series for the first time since 1999.

"He’s the most engaging, charismatic, best-connecting coach I’ve seen," general manager Alex Anthopoulos said. "Obviously, he’s got great content. I don’t want to take away from that. But, man, that guy is just like, anybody who gets to spend time with him, he’ll get you to run through a wall in two seconds."

There are aggressive and confident sends in crucial situations, such as consecutive plays with Braves down two runs in the bottom of the eighth inning in Game 2 of the NL Championship Series. Two close plays at the plate, the first Eddie Rosario with a nifty slide after a late jump, but two runs to tie the game before beating the Los Angeles Dodgers in the ninth.

Even with Atlanta already up 5-1 in Game 1 of the World Series, Washington sent Dansby Swanson home on a shallow flyball in the eighth inning. Another run on another close play.

Earlier in that opener, Albies made an impressive backhanded snag of a short hop — a play virtually identical to what Washington had worked on with him during the Braves’ workout day before the World Series.

"When you know he’s 69 years old, out there all day, working harder than almost all of us, you want to be out there," Freeman said. "He means a whole lot to this team, this organization, and to get him back to this chance to win a World Series ... there’s a lot of us and a lot of coaches in that room that to win a World Series for them, it would be huge." 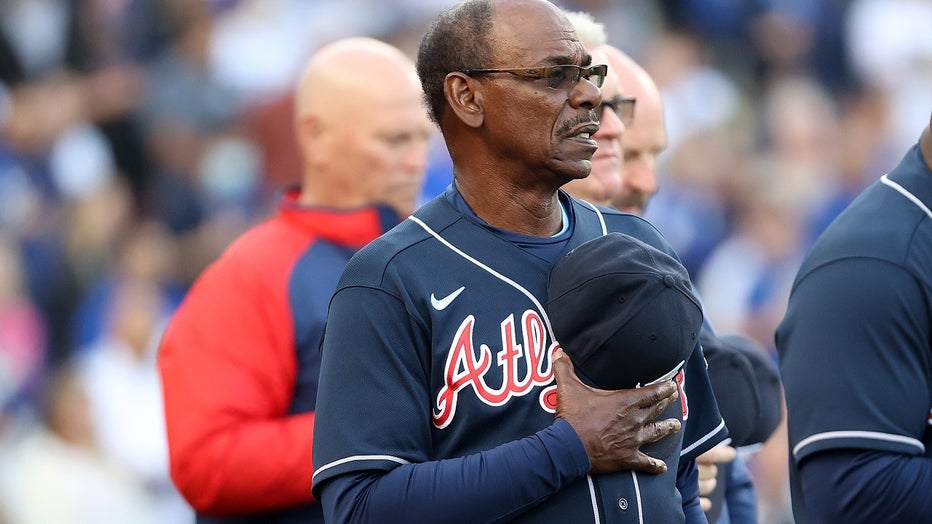 Third base coach Ron Washington #37 of the Atlanta Braves stands for the National Anthem prior to Game Four of the National League Championship Series against the Los Angeles Dodgers at Dodger Stadium on October 20, 2021 in Los Angeles, California. (

When Washington made his major league debut with the Dodgers late in the 1977 season, he was on the same team as Dusty Baker, now the 72-year-old manager of the Astros.

The skinny middle infielder had more than twice as many games in the minors than the majors in 20 seasons as a professional player. Washington then spent four years as a minor league coach before 11 seasons as an assistant in Oakland, the last 10 as the third base coach before becoming the Rangers manager in 2007.

Washington offered to resign late in the 2009 season after admitting to trying cocaine once while home during the All-Star break, and failing a drug test. The Rangers stuck by him then, and again when the story became public the following spring before what became their first World Series season.

Texas got back to the World Series in 2011, and led 7-5 with two outs in the bottom of the ninth of a potential clincher in Game 6 before David Freese, with two strikes, hit a two-run triple past a leaping Nelson Cruz and off the right-field wall. Josh Hamilton’s two-run homer put the Rangers back ahead in the 10th, and they still led with two strikes on Lance Berkman before his tying, two-out single. Freese won it with a homer in the 11th.

"I’m pulling for that guy, man. I love Wash. He’s a great human being, he’s a baseball guy," said Cruz, who was at Game 2 to receive Major League Baseball’s Roberto Clemente Award for character, community involvement and philanthropy, and shared a hug with Washington.

"He always had the right thing to say at the right moment, so I couldn’t be more happy for him," the Tampa Bay slugger said.

The Rangers were on their way to their first losing record in six years, though Washington was expected back in 2015, when he suddenly resigned for personal reasons on Sept. 5, 2014. He revealed two weeks later that he had broken the trust of his wife, Gerry, and said he was more embarrassed than he’d ever been because of that infidelity.

Not long after that — though she didn’t talk to him for a bit — Washington’s wife told him he had to forgive himself. They have now been married for nearly 50 years and still have their home in New Orleans.

Washington rejoined Oakland’s staff midway through 2015, and remained there until after the 2016 season, when he was a finalist to become Atlanta’s new manager. Snitker instead was promoted from the interim role, but then hired Washington as his third base coach.

"I’ve traveled a lot of routes in my life, and some of it I really appreciated. Some of it, I wish I could take back," Washington said. "But each time that things set you back, it just depends how you look at it. I looked at it as a learning experience, you know, and the learning experience is still catapulting me in the game of baseball.

"I didn’t let it take me down. I apologized for the things I did wrong, and I never ran from it. I stood up, and faced it," he said, before exhibiting a wide smile. "And you know, the only thing I can say is baseball has been very, very good to me."