Footage released by the Azov Battalion on May 1, 2022, shows a tank firing at close range at a building near the Azovstal steelworks in Mariupol, where members of the regiment continue to hold out against Russian forces. Credit: Azov Battalion via Storyful

ZAPORIZHZHIA, Ukraine - Fifty more civilians, including 11 children, were rescued Friday from the tunnels under a besieged steel plant in Mariupol where Ukrainian fighters have been making their last stand to prevent Moscow's complete takeover of the strategically important port city.

The Russian Interdepartmental Humanitarian Response Center, a Russian government agency, issued a statement saying 11 children were among the 50 people rescued from the Azovstal steel plant and handed over to representatives of the United Nations and the International Committee of the Red Cross.

Ukraine's deputy prime minister, Iryna Vereshchuk, confirmed that 50 "women, children and elderly people" managed to leave the sprawling complex, and she and the Russian agency said rescue efforts would continue on Saturday.

The fight for the last Ukrainian stronghold in a city reduced to ruins by the Russian onslaught appeared increasingly desperate amid growing speculation that President Vladimir Putin wants to finish the battle for Mariupol so he can present a triumph to the Russian people in time for Monday's Victory Day, the biggest patriotic holiday on the Russian calendar.

Some 2,000 Ukrainian fighters, by Russia’s most recent estimate, are holed up in the vast maze of tunnels and bunkers beneath the Azovstal steelworks, and they have repeatedly refused to surrender. Ukraine has said a few hundred civilians were also trapped there, and fears for their safety have increased as the battle has grown fiercer in recent days. 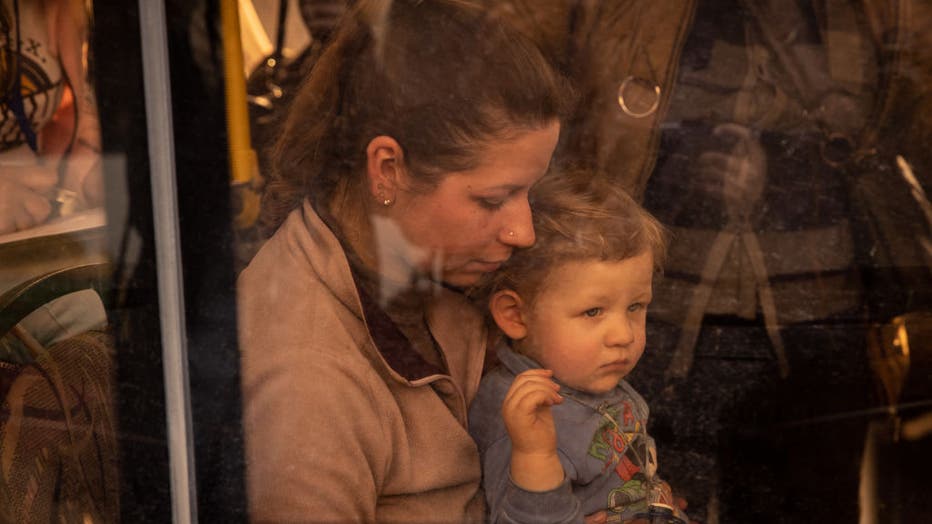 ZAPORIZHZHIA, UKRAINE - MAY 03: A woman sits with a child on an evacuation bus after arriving at an evacuation point for people fleeing the Azovstal plant, Mariupol, Melitopol and the surrounding towns under Russian control on May 3, 2022, in Zaporiz

"Our colleagues are currently on the ground," U.N. spokesman Stephane Dujarric said of the latest evacuation effort. "We are in an extremely delicate phase of this operation, working in close coordination with both the Ukrainian authorities and the Russian authorities."

He declined to share details "for the sake of the safety of those we’re trying to get out, and, of course, for our own staff, which are there."

Kateryna Prokopenko, whose husband, Denys Prokopenko, commands the Azov Regiment troops inside the plant, issued a desperate plea to also spare the fighters. She said they'd be willing to go to a third country to wait out the war but would never surrender to Russia because that would mean "filtration camps, prison, torture, and death."

If nothing is done to save her husband and his men, they will "stand to the end without surrender," she told The Associated Press on Friday as she and relatives of some of regiment members drove from Italy to Poland.

It could takes days to learn details about the latest evacuations from the steel plant, since people escaping Mariupol typically have to pass through contested areas and many checkpoints before reaching relative safety in the Ukrainian-controlled city of Zaporizhzhia, about 140 miles (230 kilometers) to the northwest.

Two previous evacuations from the plant and city that were negotiated by the U.N. and the Red Cross rescued roughly 500 people from the steel plant and elsewhere in Mariupol. Andriy Yermak, head of Ukraine’s presidential office, also said Friday that 500 civilians had been rescued, but it wasn't clear if that included the previous rescue figure.

Scenes from the Azovstal iron and steelworks plant before the war:

FILE IMAGE - Azovstal steelworks in the industrial city of Mariupol in eastern Ukraine on June 1, 2017. (Photo by Maxym Marusenko/NurPhoto via Getty Images)

Some of the plant's previous evacuees spoke to the AP about the horrors of being surrounded by death in the moldy, underground bunker with little food and water, poor medical care and diminishing hope. Some said they felt guilty for leaving others behind.

"People literally rot like our jackets did," said 31-year-old Serhii Kuzmenko, who fled along with his wife, 8-year-old daughter and four others from their bunker, where 30 others were left behind. "They need our help badly. We need to get them out."

Fighters defending the plant said Friday on Telegram that Russian troops had fired on an evacuation vehicle on the plant's grounds. They said the car was moving toward civilians when it was hit by shelling, and that one soldier was killed and six were wounded.

Russia took control of Mariupol, aside from the steel plant, after bombarding it for two months. Ahead of Victory Day, which marks the Soviet Union’s triumph over Nazi Germany, municipal workers and volunteers cleaned up what remains of the city, which had a prewar population of over 400,000 but where perhaps 100,000 civilians remain with little food, water, electricity or heat. Bulldozers scooped up debris and people swept streets against a backdrop of hollowed-out buildings, workers repaired a model of a warship, and Russian flags were hoisted on utility poles.

The fall of Mariupol would deprive Ukraine of a vital port, allow Russia to establish a land corridor to the Crimean Peninsula, which it seized from Ukraine in 2014, and free up troops to fight elsewhere in the Donbas, the eastern industrial region that the Kremlin says is now its chief objective. Its capture also holds symbolic value since the city has been the scene of some of the worst suffering of the war and a surprisingly fierce resistance.

Asked whether Russia would soon take full control of Mariupol, Ukrainian President Volodymyr Zelenskyy said: "Mariupol will never fall. I’m not talking about heroism or anything."

"It is already devastated," he told a meeting at London’s Chatham House think tank. He also said he remains open to negotiations with Russia, but repeated that Moscow must withdraw its forces.

While they pounded away at the plant, Russian forces struggled to make significant gains elsewhere, 10 weeks into a devastating war that has killed thousands of people, forced millions to flee the country and flattened large swaths of cities.

RELATED: NASA astronaut who has feuded with Russian space director shares tweets on how to disable Russian tanks

The Ukrainian military’s general staff said Friday that its forces repelled 11 attacks in the Donbas and destroyed tanks and armored vehicles, further frustrating Putin’s ambitions after his abortive attempt to seize Kyiv. Russia gave no immediate acknowledgement of those losses.

The British Defense Ministry said Russia may be struggling to execute its plan in the Donbas partly because it's bogged down at the plant in Mariupol. The fighting at the plant "has come at personnel, equipment and munitions cost to Russia," it said.

The Ukrainian army also said it made progress in the northeastern Kharkiv region, recapturing five villages and part of a sixth.

— A Ukrainian army brigade said it used an American Switchblade "suicide" drone against Russian forces in what was likely Ukraine's first recorded use of such weapon in combat.

— The Ukrainian governor of the eastern Luhansk region said residents of the city of Kreminna were being terrorized by Russian troops trying to cross the Seversky Donets River. Serhiy Haidai accused Russian troops of checking phones and "forcibly disappearing Ukrainian patriots." His statements could not be immediately verified.

— Haidia also said more than 15,000 people remain in Severodonetsk, a city in the Luhansk region that's seen as a key Russian target. He said three people were evacuated from Severodonetsk on Friday and that he believes most residents wish to remain even though "entire blocks of houses are on fire."

— The small village of Nekhoteevk, in Russia’s southern Belgorod region bordering Ukraine, was being evacuated Friday due to shelling from Ukrainian territory, according to the regional governor, Vyacheslav Gladkov. His claims couldn't be immediately verified.