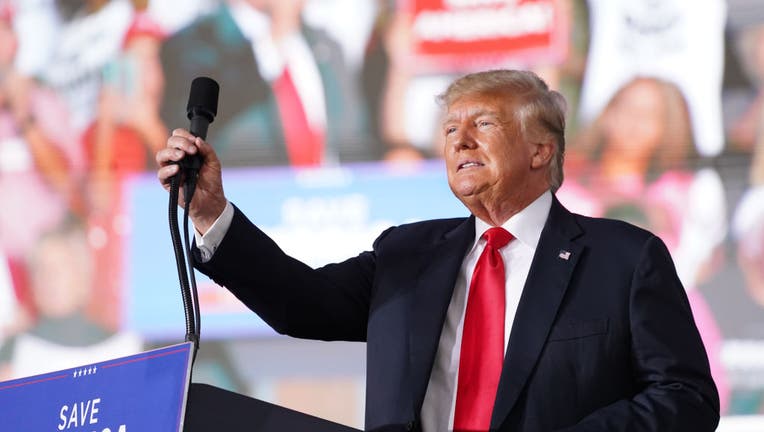 Former US President Donald Trump adjusts the microphone at a rally in Perry, Georgia. (Photo by Sean Rayford/Getty Images)

ATLANTA - Former President Donald Trump’s political action committee has given $500,000 to a group that is running attack ads in Georgia against Republican Gov. Brian Kemp.

The spending appears aimed at boosting former U.S. Sen. David Perdue, whom Trump has endorsed in the GOP gubernatorial primary, but the ad never mentions Perdue by name.

The Save America PAC entered the year with $120 million in cash. But until now, the former president has been reluctant to spend that money beyond small contributions to candidates and money spent on rallies he is now holding almost every week.

Federal campaign records show the donation went to a group called Get Georgia Right PAC in March, as first reported by Politico.

The ad began airing earlier this month, according to Kantar Media. The Associated Press also obtained a copy of a text message the group sent urging people to watch the ad.

The spending comes at a time that Perdue is trailing in the polls and is being outspent by Kemp. Perdue, who’s worth $50 million, has suggested he could kick in some of his own money.

"David Perdue is going to need a lot more than $500,000 to distract from his unhinged rant attacking the Georgia State Patrol," Hall said.

A Perdue loss in Georgia in the state’s May 24 primary could be particularly embarrassing for Trump, who recruited Perdue to challenge Kemp and pressed another Republican — Vernon Jones — to exit the governor’s race and run for Congress instead. Trump has also endorsed an extensive slate of other Republicans in Georgia running for statewide and congressional offices.

Trump called Kemp a "turncoat," a "coward" and "a complete and total disaster" at a rally in Commerce, Georgia, last month. But the former president was noncommittal in an April 6 interview with conservative radio host John Fredericks about whether he would do an additional rally for Perdue. He told Fredericks that it’s "not easy to beat a sitting governor, just remember that," adding that "it’s a close race and we’ll see what happens."

Perdue has parroted Trump’s lies in his own attacks against Kemp, declaring at the Commerce rally that "our elections in 2020 were absolutely stolen."