WASHINGTON - President Trump vented his frustration Monday about the criticisms leveled against him over recent controversies, including his Syria pullout decision, the location of the 2020 G-7 summit and the House’s “illegitimate” impeachment inquiry, while saying the "president of the United States should be allowed to run the country, not have to focus on this kind of crap."

The president spoke to reporters ahead of a Cabinet meeting at the White House, striking an unapologetic tone as he defended his withdrawal of the U.S. military from northern Syria, claiming that his decision was simply a delivery of a 2016 campaign promise to bring U.S. troops home.

Earlier this month, Trump ordered the bulk of approximately 1,000 U.S. troops in Syria to withdraw after officials said Turkish President Recep Tayyip Erdoğan made it clear in a phone call that his forces were about to invade Syria to push back Kurdish forces. Turkey has considered many of the Kurdish fighters to be terrorists. Several hundred U.S. troops currently remain in the southern Syrian outpost but are there mostly to counter threats from Iran.

The president, despite mounting criticisms over the move over longstanding military relations with Kurdish armed forces, has maintained that the Kurds are “going to be safe,” while noting that the U.S. “never agreed to protect [them] for the rest of their lives.”

Last week, the president sent a letter to Erdoğan encouraging him to “work out a good deal,” threatening to “destroy” the Turkish economy if he continued his aggression against the Kurds.

“I’m trying to get out of wars, we may have to get in wars—we’re better prepared than we’ve ever been,” Trump said, noting that he has his eye on Iran, and warned that the country “could be hit like they’ve never been hit before.”

But Trump went on to blast congressional Democrats, including House Speaker Nancy Pelosi, D-Calif., and House Intelligence Committee Chairman Adam Schiff, D-Calif., over the formal impeachment inquiry into him.

“They want to impeach me because it’s the only way they’re gonna win,” Trump said. “It’s so illegitimate. It cannot be the way our great founders meant this to be.”

He went on to say: “The president of the United States should be allowed to run the country, not have to focus on this kind of crap--while at the same time, doing a great job on Syria, and Turkey and all of the other things that we're doing." 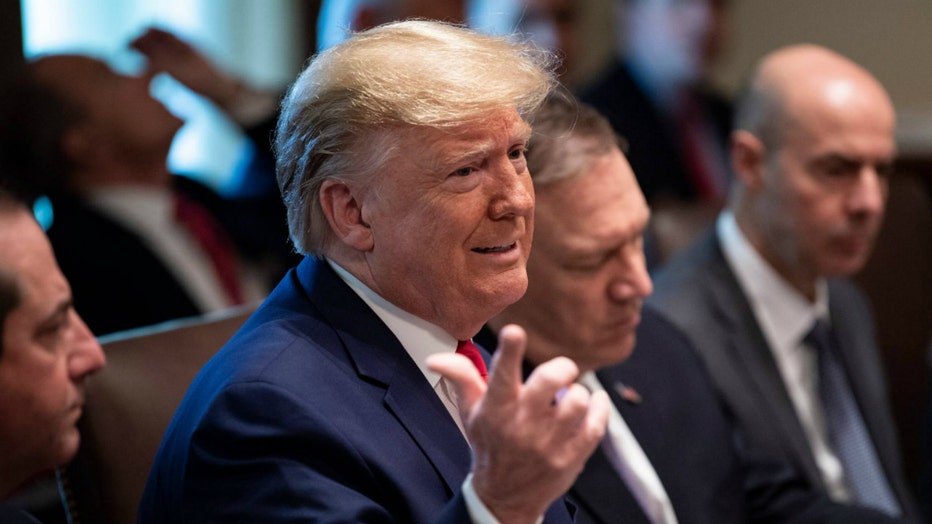 US President Donald Trump speaks to the press before a cabinet meeting at the White House October 21, 2019, in Washington, DC. (Photo by Brendan Smialowski / AFP) (Photo by BRENDAN SMIALOWSKI/AFP via Getty Images)

The impeachment inquiry was sparked by a whistleblower complaint that said that Trump had pushed Ukrainian President Volodymyr Zelensky to launch an investigation into former Vice President Joe Biden and his son, Hunter Biden, over their business dealings in Ukraine—specifically, why the elder Biden pressured the former Ukrainian president to fire a top prosecutor who was investigating a natural gas firm where Hunter sat on the board. The whistleblower’s complaint stated their concerns that Trump was soliciting a foreign power to influence the 2020 presidential election.

The president’s request also came after millions in U.S. military aid to Ukraine had been frozen, something critics have cited as evidence of a quid pro quo arrangement. The White House and the president’s allies, though, have denied any sort of quid pro quo, and the Bidens have maintained that they did “nothing wrong.”

The president then shifted his focus to the controversy surrounding his proposal to host the 2020 G-7 summit at his property—Trump National Doral Golf Club outside of Miami, Florida. The White House announced last week that the resort would host the international summit, but after attacks from Democrats and ethical concerns of the president personally profiting off an official government event, the White House backed down.

“Doral was a very simple situation,” he said, noting he planned to host the event there at “no cost.” “It would have been great, but the Democrats went crazy, even though I would have done it free.”

“I was willing to do this for free. It would have been the greatest G-7 ever,” he said.

Trump went on to explain that he donates his presidential salary, which he said is approximately $450,000, while also giving his businesses to his family and trusts. He went on to deliver fresh swipes at former President Barack Obama over his business agreement with Netflix, and his book deal.

“I’m sure he didn’t even discuss it while he was president, yeah, yeah,” Trump said.

“You people with this phony emoluments clause,” he said. “I would say it cost me between $2 and $5 billion to be president—and if I had to do it again, I would. I’m making a big difference for our country.”