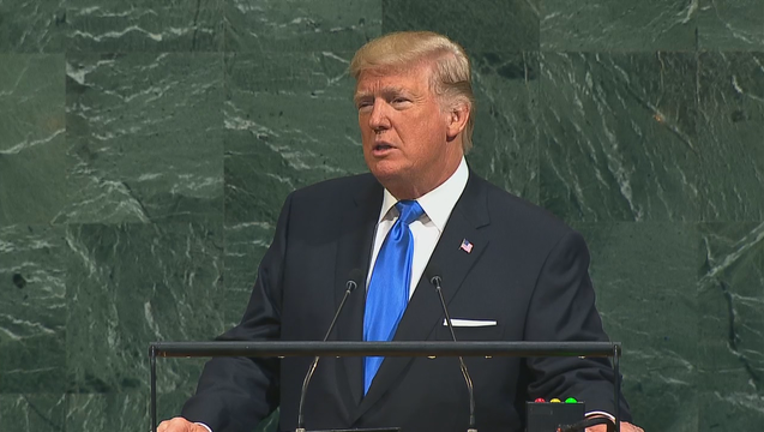 WASHINGTON (AP) - President Donald Trump said Friday that the centerpiece of his plan to help American businesses and workers "thrive, compete and grow" is a "giant, beautiful, massive, the biggest ever in our country, tax cut."

Trump and congressional Republicans unveiled the broad outlines of the tax plan earlier this week.

"My administration is working every day to lift the burden on companies and workers so you can thrive, compete and grow," Trump said in a speech to the National Association of Manufacturers. He said the tax cut plan was a core element.

The nearly $6 trillion plan sketched out this week by Trump and other officials would deeply reduce taxes for corporations, simplify tax brackets and nearly double the standard deduction used by most tax filers. But many details remain to be fleshed out.

In the remarks, Trump highlighted a provision of the plan that would allow businesses for the next five years to write off the full cost of new equipment in the year it's purchased. Trump said that proposal alone will encourage companies to invest and create jobs.

Under the broader proposal, corporations would see their top tax rate cut from 35 percent to 20 percent. Seven personal tax brackets would be reduced to three: 12 percent, 25 percent and 35 percent. But the information released didn't include the income levels applied to the rates, making it difficult to know how a typical family's tax bill may be affected.

Trump said a 20 percent corporate tax rate will be the lowest top marginal income tax rate for small- and medium-sized businesses in more than 80 years. "It will be rocket fuel for our economy," he said.

The Republican tax plan also recommends a surcharge for the very wealthy. The standard deduction would nearly double to $12,000 for individuals and $24,000 for families, basically increasing the amount of personal income that would not be taxed. Deductions for mortgage interest and charitable giving would remain, but the plan seeks to end most other itemized deductions.

Meanwhile, Senate Republicans unveiled a budget plan Friday that lays the groundwork for overhauling the tax code. The House and Senate must pass the blueprint before lawmakers can tackle the still-developing tax bill.

The Senate Budget Committee release comes before a committee vote next week. A companion House measure is headed for a floor vote next week, too.

In the address, Trump also reviewed policy changes since he took office in January that he said are intended to improve the business climate, including lifting restrictions on energy production, reversing environmental rules and rolling back regulations.

He also highlighted economic gains of the past eight months.

Jay Timmons, president and CEO of the association, said Trump is a leader "who has made manufacturing the engine of our country."

Trump wants to sign tax legislation into law by the end of the year.