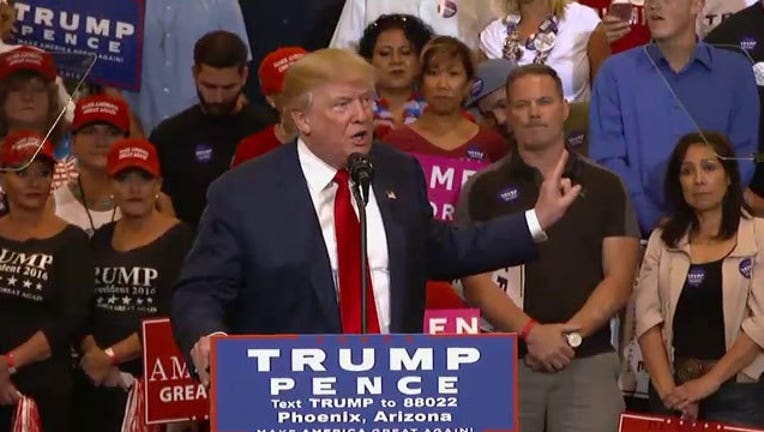 Trump's chief diplomat held out hope the North would return to the bargaining table, though the president's envoy to the United Nations said the Security Council had "pretty much exhausted" all its options.

Kim Jong Un has pledged to continue the North's programs, saying his country is nearing its goal of "equilibrium" in military force with the United States.

North Korea will be high on the agenda for world leaders this coming week at the annual meeting of the U.N. General Assembly, Trump's biggest moment on the world stage since his inauguration in January.

Trump is scheduled to address the world body, which he has criticized as weak and incompetent, on Tuesday.

Trump, who spent the weekend at his New Jersey golf club, tweeted that he and South Korean President Moon Jae-in discussed North Korea during their latest telephone conversation Saturday.

Asked about Trump's description of Kim, national security adviser H.R. McMaster said "Rocket Man" was "a new one and I think maybe for the president." But, he said, "that's where the rockets are coming from. Rockets, though, we ought to probably not laugh too much about because they do represent a great threat to all."

McMcaster said Kim is "going to have to give up his nuclear weapons because the president has said he's not going to tolerate this regime threatening the United States and our citizens with a nuclear weapon."

Asked if that meant Trump would launch a military strike, McMaster said "he's been very clear about that, that all options are on the table."

Some doubt that Kim would ever agree to surrender his arsenal.

"I think that North Korea is not going to give up its program with nothing on the table," said Democratic Sen. Dianne Feinstein of California, a member of the Senate Intelligence Committee.

Kim has threatened Guam, a U.S. territory in the Pacific, and has fired missiles over Japan, a U.S. ally. North Korea also recently tested its most powerful bomb.

Trump, in a tweet, asserted that long lines for gas were forming in North Korea, and he said that was "too bad."

Secretary of State Rex Tillerson said he was waiting for the North to express interest in "constructive, productive talks."

"All they need to do to let us know they're ready to talk is to just stop these tests, stop these provocative actions, and let's lower the threat level and the rhetoric," he said.

But Haley warned of a tougher U.S. response to future North Korean provocations, and said she would be happy to turn the matter over to Defense Secretary Jim Mattis "because he has plenty of military options."

Mattis said after Kim tested a hydrogen bomb earlier this month that the U.S. would answer any threat from the North with a "massive military response, a response both effective and overwhelming."

Trump has threatened to rain "fire and fury" on North Korea if the North continued with its threats. Haley said that wasn't an empty threat from the president but she declined to describe the president's intentions.

"If North Korea keeps on with this reckless behavior, if the United States has to defend itself or defend its allies in any way, North Korea will be destroyed and we all know that and none of us want that," Haley said. "None of us want war. But we also have to look at the fact that you are dealing with someone who is being reckless, irresponsible and is continuing to give threats not only to the United States, but to all their allies, so something is going to have to be done."

In other developments Sunday:

-McMaster said "the president's ears are open" to possible participation in a new global climate agreement that addresses his concerns about the original 2015 deal, when Barack Obama was president. The White House has denied reports that Trump has changed his mind about withdrawing the U.S. from the accord.

-McMaster suggested that Friday's bomb attack in London could lead Trump to introduce a stronger travel ban. Trump's original travel ban has been tied up in court, with the Supreme Court scheduled to hear arguments next month in a legal challenge.

Haley and Feinstein spoke on CNN's "State of the Union," McMaster appeared on ABC's "This Week" and "Fox News Sunday" and Tillerson was on CBS' "Face the Nation."