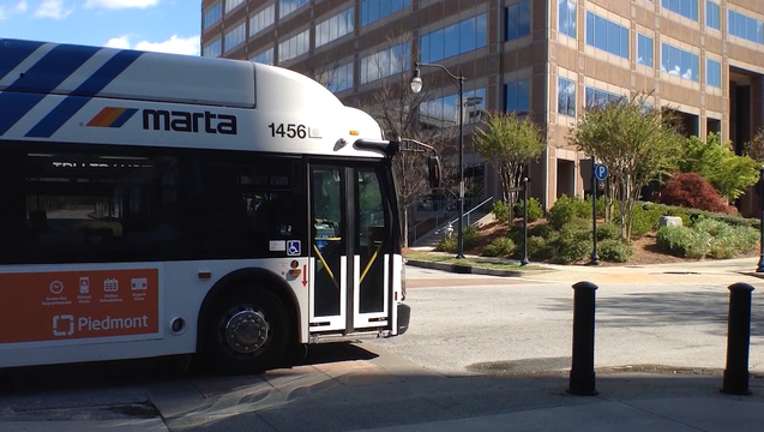 ATLANTA (AP) - In traffic-plagued metro Atlanta, a plan to expand the public transit system could soon test whether the once predominantly white suburbs have eased their longstanding resistance to the notion, which has been the subject of a decadeslong debate centering on race.

The Metropolitan Atlanta Rapid Transit Authority was created in 1965 as the city's primary operator of public train and bus services, but neighboring suburban counties have consistently voted down the idea of joining. Some have formed ancillary transit systems instead.

The result is a hodgepodge of independently run services that make commuting across county lines using mass transit nearly impossible.

"It took us four hours and 10 minutes," he said. "But the worst thing was that I had to go to three different websites to plan my trip ... then I had to pay with three different methods of payment and I had to wait 30 minutes between jurisdictional lines."

The average Atlanta-area commuter spends 31 minutes each way getting to work, according to the U.S. Census Bureau.

Under a proposal approved this year by Georgia lawmakers, a new regional authority called The ATL would be responsible for implementing transit projects across 13 metro counties, ensuring plans connect efficiently across jurisdictions. The bill awaits signature by Republican Gov. Nathan Deal, who has said he will sign the legislation.

Expanding mass transit is seen as a key step toward solving Atlanta's traffic problems and the air pollution from cars idling in rush-hour gridlock. But the plan may face an uphill battle in key counties, including Cobb and Gwinnett - historically white, affluent suburban areas that have long resisted a connection to the racially diverse center of Atlanta.

Kevin Kruse, a Princeton University history professor who has written extensively about Atlanta in the 20th century, said the historical resistance was largely motivated by race and closely linked with "white flight" of the 1960s.

"You can't understand why people in the suburbs would not want to be connected with MARTA unless you understand that, fundamentally, they moved to the suburbs to get away from Atlanta," Kruse said.

White suburbanites did not want a physical link with the city, Kruse said, which in the 1970s meant possibly being part of school and housing integration programs, and did not want people from Atlanta coming into their communities.

"And by this, they generally meant black people," he said.

But Atlanta's northern suburbs have transformed considerably in recent decades.

Between 1990 and 2016, Cobb County grew from roughly 448,000 people to 748,000, while non-Hispanic white residents went from 86 percent of the county to 53 percent, according to the U.S. Census Bureau. Over the same period, Gwinnett County surged from roughly 353,000 residents to 920,000, while the proportion of non-Hispanic white residents slid from 89 percent of the county to just 39 percent.

Charlotte Nash, chairman of the Gwinnett County Board of Commissioners, said population growth and changes there "have generated a shift in opinion" around public transportation. "A lot has changed in Gwinnett," Nash said.

Dave Williams, an infrastructure expert at the Metro Atlanta Chamber of Commerce, said access to public transit has become a major concern for businesses making decisions about where to locate.

"High-skilled young professionals prefer communities that are walkable and are served by high-quality transit. And so, as a result, decisions about site locations (for businesses) have reflected that," he said.

Williams pointed to a slew of major employers - including Mercedes-Benz, NCR and State Farm - that have moved into locations easily accessible to MARTA routes.

Amazon has likewise cited "direct access to rail, train, subway/metro, bus routes" as a core requirement for its second headquarters, which includes Atlanta among the 20 final contenders.

Ram Gouru takes a MARTA train daily from Midtown Atlanta to the last stop on the line. There, he gets in his car and drives - an additional 45 minutes on a good day, but up to 1.5 hours with heavy traffic - to his home in suburban Suwanee in northern Gwinnett County. Gouru said he was "100 percent" supportive of expanding public transit options in Gwinnett.

But Republican state Sen. Kay Kirkpatrick, who represents portions of Cobb County, said she thought transit expansion could be a difficult sell with voters there, though she said she had not seen a racial tone to recent discussions.

The proposal singles out Cobb by allowing for the creation of a special transit district, possibly including the area around the Atlanta Braves' new stadium, SunTrust Park, that could join the broader system without the rest of the county.

"Although some parts of (Cobb) County ... are extremely motivated on the subject, people in other parts of the county don't trust MARTA," Kirkpatrick said. "Cobb has always been big on local control."