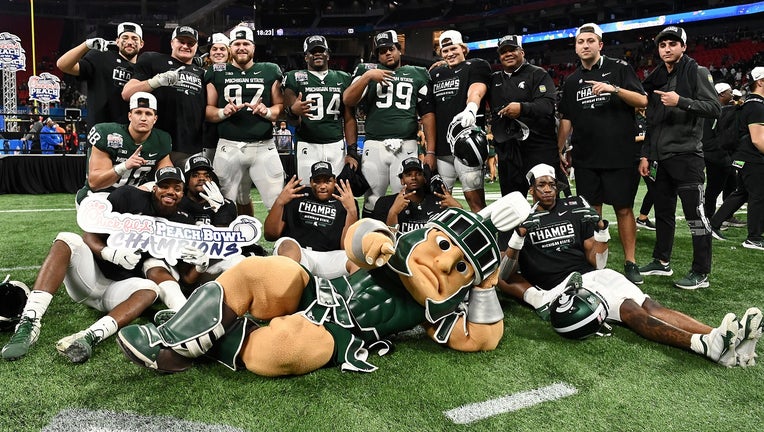 ATLANTA - Payton Thorne’s 22-yard touchdown pass to Jayden Reed gave No. 11 Michigan State the lead with less than three minutes remaining and the Spartans overcame an 11-point deficit to beat No. 13 Pittsburgh 31-21 on Thursday night in the Peach Bowl.

Cam Bright returned a fumble recovery 26 yards for a touchdown only 20 seconds into the second half for Pittsburgh (11-3). The Panthers lost fill-in starting quarterback Nick Patti to an injury in the first quarter.

Defensive end John Morgan forced the fumble by Michigan State quarterback Payton Thorne that was returned by Bright for a 21-10 lead.

It was the second big play by Pitt’s defense. Brandon Hill’s interception late in the first half set up an 87-yard touchdown drive for a 14-10 lead.

Thorne’s 15-yard scoring pass to tight end Connor Heyward cut the Panthers’ lead to 21-16 with 8:06 remaining. The Spartans were stopped on their 2-point play, with Heyward kept out of the end zone on another reception.

NO. 2 MICHIGAN, NO. 3 GEORGIA MEET IN ORANGE BOWL SEMIFINAL

Thorne completed 29 of 50 passes for 354 yards with three touchdowns and one interception. Thorne’s scoring pass to Reed with 2:51 remaining gave the Spartans a 22-21 lead. A 2-point pass to Jalen Nailor pushed the lead to three points.

With Pickett, who opted out of the game after finishing third in the Heisman Trophy voting, watching from a coach’s box, the Panthers’ transition at quarterback quickly took on added drama.

Making his first start since 2019, Patti was knocked out of the game in the first quarter.

On third down from the Michigan State 16 on the Panthers’ second possession, Patti dropped back before taking off on a run and diving for the end zone, reaching out for the touchdown before landing hand on his left shoulder.

Patti grabbed his shoulder after rising to his feet and was escorted to the Pitt locker room. When he returned later in the first half, he was not wearing shoulder pads and his left arm was in a sling.

Fans got a chance to attend the Chick-fil-A Peach Bowl FanFest at the Georgia World Congress Center before the big game at Mercedes-Benz Stadium on Thursday.

Beville, a sophomore who threw only four passes and played in only two games in the regular season, took over for Patti and completed 14 of 18 passes for 149 yards with one touchdown and one interception.

Brandon Hill’s interception of Thorne’s pass for Maliq Carr gave Pitt the ball at its 13, setting up the 87-yard touchdown drive.

Beville completed passes of 10 and 52 yards to Jordan Addison, the Biletnikoff Award winner as the nation’s top wide receiver, against Michigan State’s pass defense, which ranked last in the nation. Beville’s 5-yard touchdown pass to Jared Wayne gave the Panthers a 14-10 halftime lead.

ddison had seven catches for 114 yards.

Pitt: The game was expected to be a chance for Patti to make his case for the starting job next season. Former Southern Cal starter Kedon Slovis has announced he is transferring to Pitt and also will be part of the competition. Beville may have shown enough to be another contender.

Michigan State: Thorne showed poise in regrouping from a slow start. His two turnovers — one on an interception and one on a fumble — were costly, leading to two touchdowns. Thorne took advantage of his experience to take over the game in the final quarter.

Due to rain throughout the morning and most of the afternoon, the annual Peach Bowl parade in downtown Atlanta was canceled. The rain stopped in time for the retractable roof at Mercedes-Benz Stadium to be open for the game.

With the roof open, fans would have been strongly encouraged to wear masks, which remained mandatory in enclosed areas of the stadium.