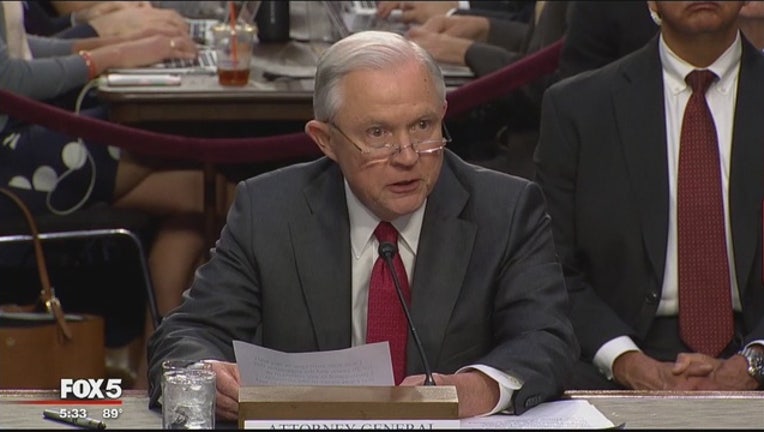 Attorney General Jeff Sessions is refusing to pledge that he won't seek to jail journalists for doing their jobs.

Under questioning at a Senate Judiciary Committee hearing from Sen. Amy Klobuchar, a Minnesota Democrat, Sessions said he could not make that "blanket" commitment.

His position is a reversal of the stance taken by attorneys general in the Obama administration, who had said they would not seek to imprison members of the news media who were doing their jobs

The Trump administration has announced an aggressive crackdown on leaks of national security information to journalists.

Attorney General Jeff Sessions says he can't say whether someone's citizenship is a reliable indicator of whether that person may be a terrorist.

Sen. Patrick Leahy, a Vermont Democrat, asked Sessions about that, noting that citizenship is at the core of the Trump administration's efforts to impose a travel ban.

The ban, which has been stalled by the courts, seeks to block the travel to the U.S. by citizens of seven countries, as well as some Venezuelan government officials and their families.

Yet Sessions did not directly answer Leahy's question.

Earlier Wednesday, Sessions said the travel ban is an important tool for fighting terrorism and that the Justice Department will continue to defend it.

Democratic Sen. Al Franken is accusing Attorney General Jeff Sessions of "moving the goalposts" in denying his interactions with the Russian ambassador.

In a testy exchange, Franken confronted Sessions about his testimony in January, in which he said he had no communications with Russians. Sessions later had to recuse himself from the Justice Department's investigation of Trump campaign ties to Russia after it was revealed he had conversations with the ambassador. Franken says his explanations of those interactions continue to change.

But Sessions, visibly frustrated and voice rising, called Franken's line of questioning unfair. He says he answered the question as a surrogate of the Trump campaign. Sessions says he may have discussed Trump's campaign positions with the ambassador but insists he did not have a continuing exchange of information with him.

Attorney General Jeff Sessions won't say whether he spoke with state officials who had threatened to sue the Trump administration if it did not end a program protecting young immigrants who were brought into the country as children and now living in the U.S. illegally.

Sessions says such conversations would be "work product" that should not be revealed. It was yet another line of questioning Sessions refused to answer. Lawmakers are asking about his role in ending the Obama-era program that protected hundreds of thousands of young people.

Attorney General Jeff Sessions says he has not been questioned by special counsel Robert Mueller's team of investigators.

Mueller has been investigating potential coordination between the Trump campaign and Russia to influence the outcome of the 2016 presidential election.

Sessions recused himself from the investigation in March, before Mueller was appointed, but he is seen as a possible witness because of his involvement in the May firing of FBI Director James Comey.

Sen. Patrick Leahy, a Vermont Democrat, asked Sessions if he had been interviewed. Sessions at first told Leahy that he would have to ask Mueller that question, but then later answered the question by saying no.

The Associated Press and other news organizations have reported that Deputy Attorney General Rod Rosenstein has spoken to Mueller's team.

Sessions says he gave President Donald Trump his opinion on Comey at Trump's request. But, under questioning by Democratic Sen. Dianne Feinstein, Sessions refused to say whether he also discussed with Trump Comey's involvement in the Russia investigation.

Sessions wouldn't say when he first discussed Comey's conduct with Trump. But Sessions said the errors of Comey's handling of the Clinton email case can't be overstated. He said Comey usurped prosecutors when he announced Clinton would not face criminal charges.

Sessions told members of the Senate Judiciary Committee during an opening statement of his oversight hearing Wednesday that the president is entitled to have private conversations with Cabinet secretaries.

Members of the committee have told Sessions that they intend to press him on his conversations with Trump, particularly about the firing in May of FBI Director James Comey.

At a separate hearing in June, Sessions told the Senate Intelligence Committee that he would not disclose his communications with Trump.

Speaking Wednesday before the Senate Judiciary Committee, he defended the legality of an executive order that seeks to block the travel to the U.S. of citizens of Chad, Iran, Libya, North Korea, Somalia, Syria and Yemen, as well as some Venezuelan government officials and their families.

In his opening statement, Sessions says "the order is lawful, necessary, and we are proud to defend it."

He says he is confident that the Justice Department will prevail in its effort to defend and enforce the ban.

Democratic senators plan to press Attorney General Jeff Sessions about his private communications with the president when he appears to answer questions before a Senate committee.

Sessions will testify to the Judiciary Committee Wednesday for the first time since his January confirmation. He'll face questions about his swift reversals of Obama-era protections for transgender people and criminal justice policies. But lawmakers are also expected to ask about the investigation into Trump campaign connections to Russia. Sessions recused himself from that probe, a decision that still frustrates President Donald Trump.

Democratic senators want Sessions to detail his conversations with Trump or announce that Trump is invoking executive privilege to shield them. At a different committee hearing in June, Sessions refused to discuss his talks with Trump, pointing to longstanding Justice tradition.