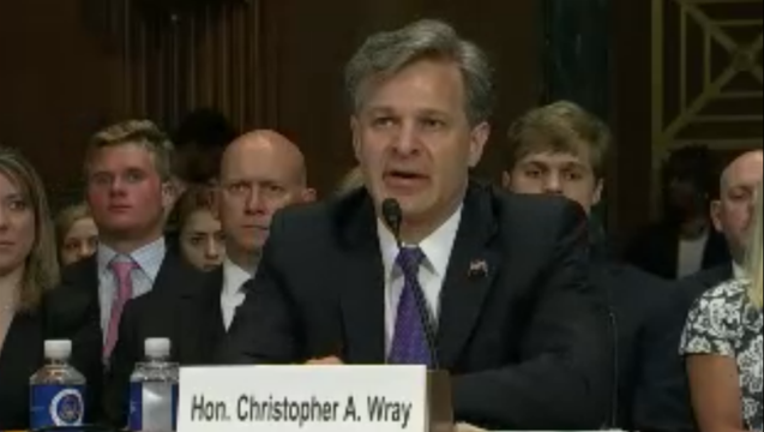 WASHINGTON (AP) - The Latest on the Senate hearing on Christopher Wray's nomination as FBI director (all times local):

The lawyer picked by President Trump to lead the FBI says he does not believe a special counsel investigation into possible coordination between Russia and the Trump election campaign is a "witch hunt."

Christopher Wray's comments to a Senate panel represent a break with President Donald Trump, who has described the probe in those terms. Wray also told senators at his confirmation hearing that he would never let politics get in the way of the bureau's mission. ___

FBI director nominee Christopher Wray says he has no recollection of providing input on Bush-era Justice Department memos on the interrogation and detention of terror suspects.

Wray was asked during his confirmation hearing about his role in the so-called "torture memos" detailing the use of certain interrogation tactics such as waterboarding and sleep deprivation. Redacted emails to and from him are included in an ACLU database on the subject.

Wray says he does not support torture and says "I have no recollection of ever reviewing, much less providing input or comments or blessing, approval," of memos on the subject.

Wray has been asked questions about his involvement in national security matters during the Bush administration, when the government authorized harsh interrogation techniques.

Christopher Wray made the comments under questioning by Sen. Lindsey Graham about Trump's own comments on the probe into Russian interference in the 2016 campaign.

In a series of statements on Twitter, Trump called Mueller's investigation a "WITCH HUNT" based on the "phony" premise of possible collusion between Russia and a cadre of Trump campaign associates.

Wray says simply, "I do not consider Director Mueller to be on a witch hunt."

President Donald Trump's pick for FBI director says efforts to meddle or interfere with U.S. elections should be reported to FBI.

Graham asked whether Trump Jr. should have agreed to that meeting; Wray stopped short of answering.

Graham then asked whether he should meet with Russians if they wanted to help his campaign.

Wray told Graham he would probably want to consult with a legal adviser before doing so. Asked whether someone should report that to the FBI, he added, "Any threat or effort to interfere with our election by any nation state or any non-state actor is the kind of thing the FBI would want to know."

FBI director nominee Christopher Wray says he has not been asked to pledge his loyalty to the White House nor would he do so.

Wray says his loyalty is to the Constitution, the rule of law and the mission of the FBI. The comments came after questions from Democratic Sen. Patrick Leahy.

Wray says, "no one asked me for any kind of loyalty oath at any point during this process, and I sure as heck didn't offer one."

Leahy says he remains disturbed by FBI director James Comey's abrupt firing. President Donald Trump is said to have asked Comey for a loyalty pledge during a private dinner before his dismissal.

Wray says he would inform the Senate Judiciary Committee of any efforts to interfere with that probe, as long as he wouldn't be breaking any law or hindering the investigation by revealing such information.

Wray says he is "committed to supporting" the investigation "in whatever way is appropriate for me." He added that any efforts to tamper would need to be dealt with "very sternly."

He says he views Mueller "as the consummate straight shooter. Someone I have enormous respect for."

Wray says he also never discussed Comey or his abrupt dismissal with the Justice Department or the FBI.

His comment came under questioning from Sen. Dianne Feinstein.

Wray says the issue only came up once, when Deputy Attorney General Rod Rosenstein told him he had appointed Robert Mueller as special counsel to oversee the investigation into Trump campaign ties to Russian meddling in the 2016 presidential election. That happened after Comey's firing.

Wray says "that made for a better landscape for me to consider taking on this position."

FBI director nominee Christopher Wray says he would lead the agency "without fear, without favoritism and certainly without regard to political influence."

Wray's statement came after Sen. Chuck Grassley asked how he viewed the independence of the FBI and its director. He says the American public rightly expects that commitment.

Wray says "anybody who thinks that I would be pulling punches as FBI director sure doesn't know me very well."

He says there's only one right way to lead the FBI, and that's with "strict independence" and by being faithful to the Constitution.

Some lawmakers will want assurances that he will be able to be independent from the White House after President Donald Trump is said to have asked for a loyalty pledge before firing former director James Comey.

Democratic Sen. Dianne Feinstein says she will seek assurances that President Donald Trump's pick for FBI director will be independent from the White House.

Feinstein says she will question Christopher Wray on how he will remain impervious to political influence.

She says she is concerned after Trump fired former FBI Director James Comey. Trump has said his decision was at least in part due to the FBI's investigation into his campaign's ties to Russian election meddling.

Feinstein says she wonders, "Will Mr. Wray and the FBI pursue investigations with independence and vigor, regardless of who may be implicated? Will he stand up for what is right and lawful?"

Feinstein says she has concerns about Wray's involvement in national security matters during the Bush administration, when the government authorized harsh interrogation techniques.

President Donald Trump's nominee for FBI director is signaling that he won't let politics get in the way of the bureau's mission.

In prepared testimony Wednesday, Christopher Wray will tell senators that he won't allow the FBI's work "to be driven by anything other than the facts, the law, and the impartial pursuit of justice."

He also is pledging his loyalty to the Constitution and to the rule of law. He says he'll follow that commitment "no matter the test."

Wray is appearing before the Senate Judiciary Committee for a confirmation hearing. He was selected to replace James Comey, who was fired by Trump in May.

Grassley, chairman of the Judiciary Committee, says Christopher Wray has an "impressive legal career" and seems qualified for the demanding job of leading the nation's top law enforcement agency.

Grassley says it's vital for the FBI director to be independent. And he says Wray's record shows he is committed to independence.

Wray faces questions Wednesday during his confirmation hearing before the committee. Some lawmakers will want reassurances that Wray will keep a boundary line between the White House. Their concerns come after Trump is said to have asked former Director James Comey for a loyalty pledge before firing him in May.

President Donald Trump's pick to lead the FBI faces a confirmation hearing Wednesday that will undoubtedly focus on the political tumult surrounding his nomination.

Both Democrats and Republicans will want assurances of Christopher Wray's independence from the White House. And they will want to know how he would operate under a president who is said to have demanded loyalty from Comey and who has appeared insensitive to the boundary between the White House and the FBI.

Wray's nomination comes after Trump abruptly fired the former director, James Comey, amid an FBI investigation into Russian interference in the presidential election.

Those close to Wray, a former top official in the Bush administration's Justice Department, say he will be a steady hand at a time of tumult.

This story has been corrected to show that Sen. Graham asked Christopher Wray whether Donald Trump Jr. should have agreed to the meeting with the Russian lawyer.