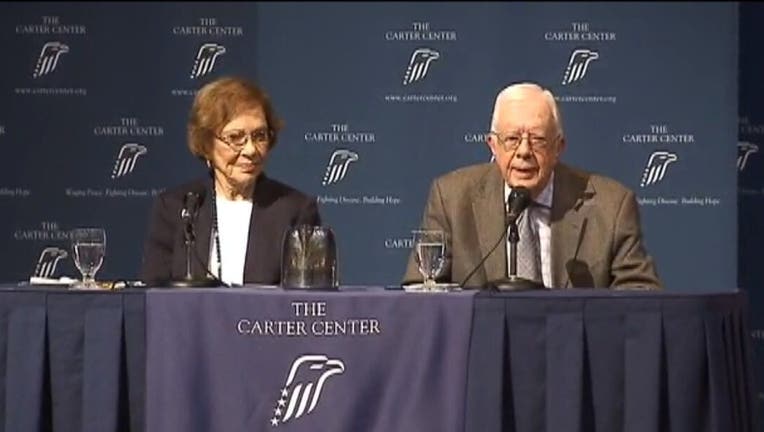 Former President Jimmy Carter and his wife Rosalynn address the future of The Carter Center at an annual meeting on Sept. 15, 2015. (FOX 5)

ATLANTA - Former President Jimmy Carter and his wife Rosalynn issued a statement late Wednesday evening after a mob broke into the Capitol building earlier in the day, interrupting the certification of the Electoral votes by Congress.

"Rosalynn and I are troubled by the violence at the U.S. Capitol today. This is a national tragedy and is not who we are as a nation. Having observed elections in troubled democracies worldwide, I know that we the people can unite to walk back from this precipice to peacefully uphold the laws of our nation, and we must. We join our fellow citizens in praying for a peaceful resolution so our nation can heal and complete the transfer of power as we have for more than two centuries."

Earlier in the day, The Carter Center, the heritage organization the Carters formed in partnership with Emory University following his time in office to advocate for human rights, quality of life, and fair and free elections across the world also issued a statement.

In the statement, the Carter Center condemns the actions of the "mob" and calls on them to evacuate Capitol Hill to allow the rule of law to continue.

"Our country's long and proud history of peaceful and democratic transitions is being tested by the events unfolding inside the U.S. Capitol, which was put on lockdown after protestors stormed the building.

"While The Carter Center supports Americans' right to protest peacefully, it strongly condemns threats or violence of any sort.

"We call on the mob inside the Capitol building to disband immediately and on all protestors to respect the 6 p.m. curfew. As many members of Congress on both sides of the aisle have said, the democratic process of certifying the election results must be allowed to continue.

"Despite the coronavirus pandemic, voters participated in the November 2020 election in record numbers. The process of counting and verify the accuracy of the results has been completed, and the extensive legal challenges have been resolved, resulting in Joe Biden being declared the winner.

"All Americans should be proud of what was accomplished. Although there is no doubt that the entire process has been credible, there has been an historically unprecedented and damaging effort to deny and reverse the expressed will of the people. This has put significant strain on our democratic system and created an ill-found double among millions of Americans about the integrity of the elections.

"As we have done throughout our history, it is time to support a peaceful transition and work together towards a prosperous and shared future."

The Carter Center monitored November’s election and hand recount audit conducted by the Georgia Secretary of State’s Office to test the new voting system in the state.