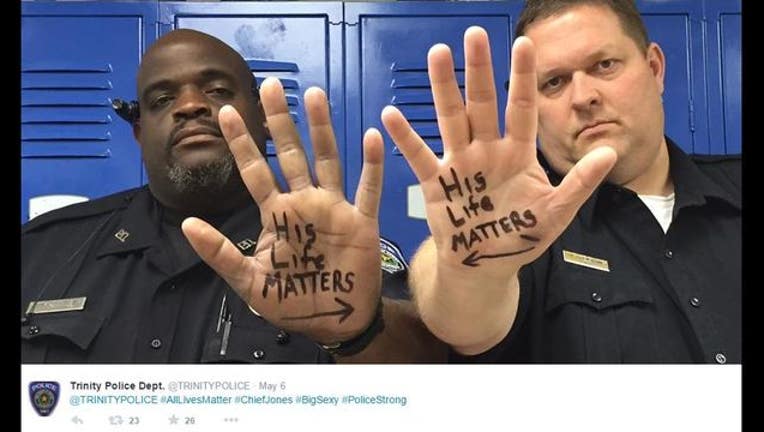 In response to the “Black Lives Matter” movement, a photo of two Texas police officers has made its way around the internet.

The Trinity Police Department uploaded the picture to both Facebook and Twitter on May 6. It shows Officer Donald Givens and Chief Steven Jones standing together. Both men have “his life matters” written on their hands with arrows pointing at each other.

The post also included the hashtags #AllLivesMatter and #PoliceStrong.

The post picked up momentum when it was shared on Monday by American Conservatives of Color. According to the group's website, they "exist to serve persons of color in the great states of the western USA."

Since the movement, people have responded with hashtags including #AllLivesMatter and #BlueLivesMatter.

American Conservatives of Color shared the photo of the Texas officers with the caption "RIGHT ON, brothers!!" It has been shared more than 93,000 times and has received more than 19,000 likes.

If the two officers look familiar... that's because you may have seen them on TV. They are stars in the CMT show Big Texas Heat. The show is about the on and off-duty antics of the Trinity Police Department. The population of the town is less than 3,000. Officer Donald Givens is known as "Big Sexy" on the show.

"We decided to put the photo out there,” said Chief Jones. “We saw similar photos out there.” “I care about Officer Givens and he cares about me and our race has nothing to do with it.”

Jones said he has read positive and negative comments on the photo.

“Some people out there were saying things negative things about our weight,” Jones explained.

He thinks people need to learn to joke a little and not be so sensitive about some of the issues going on in the news.

“There is a lot of hate out there from both sides and it’s depressing to both of us,” said Jones.

The chief said that the photo may be a little controversial, but so are some of the other photos posted on social media websites.

Their goal was to put out a positive message into their community and they are both thrilled it went further.