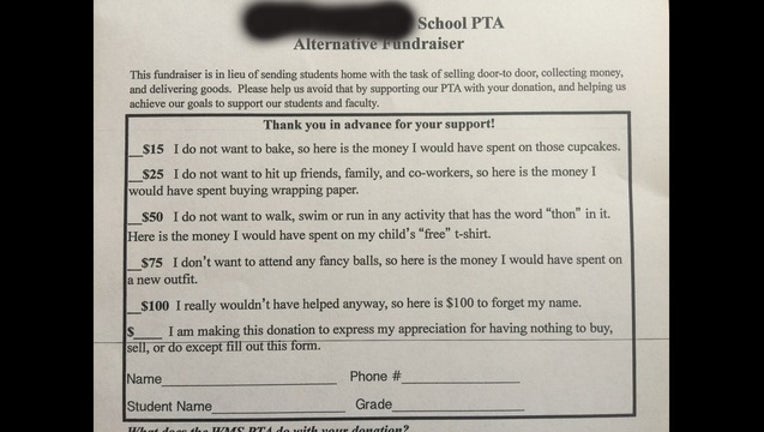 ROCKLAND, Tx. - "My first reaction was oh my goodness a fundraiser already," those were the words out of Dee Heinz's mouth when she first saw the fundraising flyer that her middleschooler brought home on Tuesday. But when the Texas mom read the fine print, she couldn't keep from laughing. It said

"__ $25 I do not want to hit up friends, family and co-workers, so here is the money I would have spend buying wrapping paper.

The mom tells FOX 5 Atlanta that after she stopped laughing she took a picture of the flyer, blurred out the schools name and posted it to Facebook. She thought her friends and family would get a kick out of it. She never imagined the post would go viral.

Heinz reassured us she's really not anti-fundraiser. She said for some people they really serve a purpose. But for her family, "with three children, it's never just THAT fundraiser. And this was the easiest option for us. We just filled in an amount and were done. I appreciated that option"

The mom says her 12 year old is the oldest of her three, and the only one to bring home this 'alternative' fundraising option. But she's hoping it catches on.