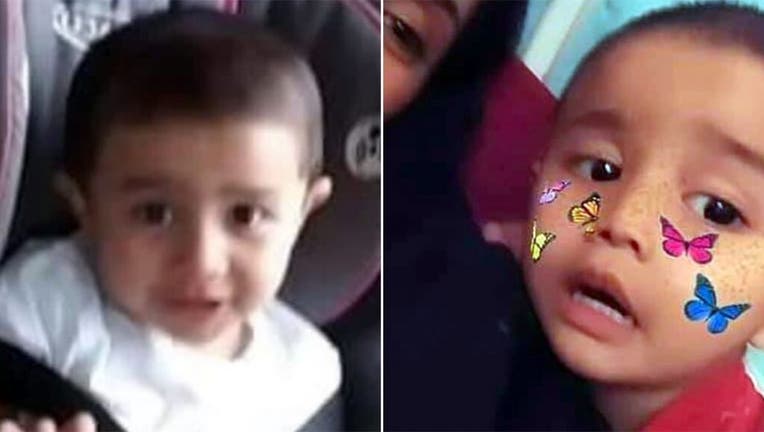 WACO, Texas - A Texas mom was arrested Tuesday after authorities found what are believed to be the remains of her missing 2-year-old son disposed of in a dumpster next to a church in Waco.

Laura Sanchez, 35, was arrested Tuesday and charged with first-degree felony injury to a child with intent, the Waco Police Department announced Tuesday afternoon. So far, she has not been charged with murder.

She has been charged in connection with the death of her son, Frankie Gonzalez, 2, whom she reported missing Monday afternoon. The investigation is ongoing. Police said Sanchez lead officers to the dumpster behind the Park Lake Drive Baptist Church Tuesday, where the body and several trash bags were found, the Waco Tribune-Herald reported.

The church is less than three miles away from where Sanchez first reported her child missing in Cameron Park around 2 p.m. Monday afternoon. She initially told police she had taken her son to use the restroom next to the splash pad in the Pecan Bottoms section of the park and had turned away briefly before realizing he was gone.

"This is a tragic scene for our community and for our police officers today, too," Waco police spokesman Officer Garen Bynum said. "A lot of us are parents too and this is just heartbreaking to see, but we will do our absolute best to investigate this fully, like to do every case, for this child."

Waco police had announced earlier Tuesday morning that the body of a young child had been found in the dumpster and officials were waiting for an autopsy to confirm the identity. Believing the remains to be Gonzalez, the Texas Department of Public Safety also discontinued its Amber Alert at that time.

Police said Sanchez told detectives Gonzalez died in her care on or around May 28. She allegedly admitted to lying to officers Monday when said the 2-year-old was being cared for by her eldest son, Killeen, over the weekend. She now claims she stashed the boy’s body in the dumpster on Saturday before reporting him missing from the park Monday, according to the Tribune-Herald.

Details about how the child died were not immediately released by authorities.

The Waco Fire Department, Texas Department of Criminal Justice and the McLennan County Sheriff's Office joined in searching the park lake by boat and the sky overhead by helicopter before suspending efforts by 8:30 p.m. to resume in the morning,  KXXV reported.