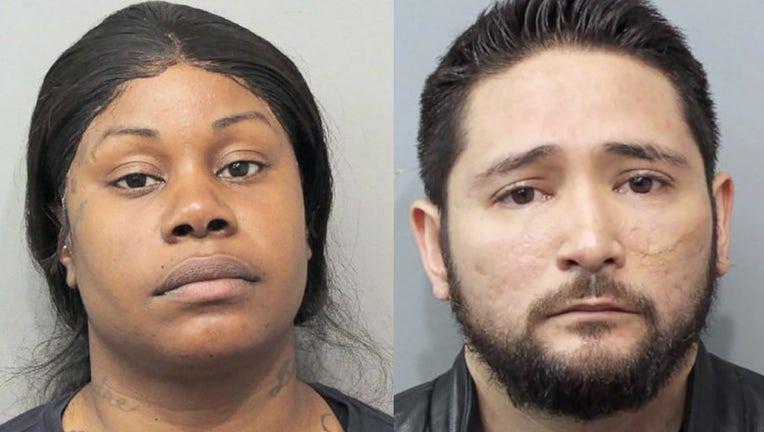 HOUSTON - The mother of Tavores Henderson and the mother's boyfriend were taken into custody Monday morning after a judge raised their bonds.

Tavores Henderson’s mother and her boyfriend are back behind bars after having the amount of their bond increased. Tiffany Henderson and Geoffrey Wheeler are accused of hiding her son after investigators say the 21-year-old ran over and killed Nassau Bay Sgt. Kaila Sullivan.

According to investigators, Henderson’s mother Tiffany Henderson and her boyfriend, Geoffrey Wheeler, helped Tavores hide from officers after he killed Sgt. Sullivan.

Tiffany Henderson and Geoffrey Wheeler are charged with hindering apprehension. They were both out on bond this weekend.

"It has been a tragic situation to everyone. Especially to the victims of this situation and everyone is so sorry about that. Our hearts go out to them. My son’s heart is heavy,” says Malou Wheeler.

Tavores Henderson was also expected to appear in court Monday morning, but the date was reset to February 27. Tavores is charged with capital murder and is being held without bond.

"We express our deepest sympathy to the family of the victim, Sgt. Sullivan. May her gentle soul rest in peace but I won’t say anything about the case at this time,” says Wheeler’s attorney, Stella Andrews.

Tavores was taken into custody Thursday afternoon after a manhunt that lasted more than a day.

Sgt. Sullivan’s 16th anniversary with Nassau Bay would have been two days after Christmas. A funeral service will be held this week.