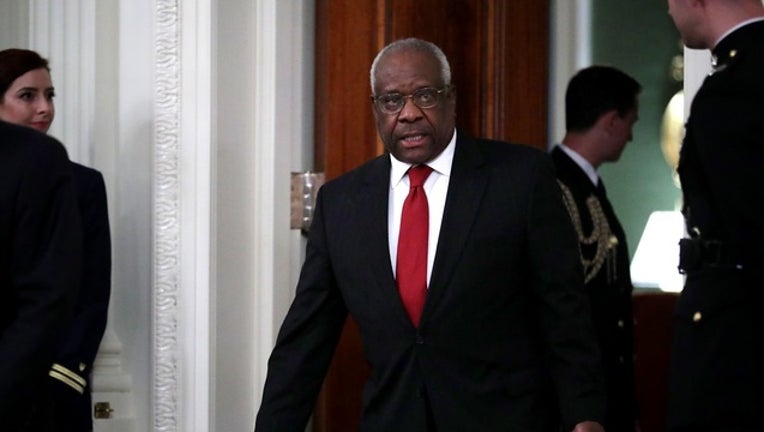 "It is becoming increasingly common for public opinion to galvanize behind particular outcomes and around particular interests without regard for the law or an objective assessment of facts," Thomas observed in a speech in Georgia on Friday.

But he said judges must resist temptations to fit into a narrative that is being advanced and must make the decision required by the law, even if it's not popular. Thomas cited the Supreme Court justices who ruled against racial segregation as an example.

Thomas also stressed the importance of judges maintaining their independence from the political branches of government.

"In our great country, the judiciary is not a puppet for those in power, nor is it the engine for pioneering social change," he said. "Rather, it is a safeguard against tyranny and an assurance of neutral arbiters for those seeking the protection of the law."

Thomas spoke in Covington, east of Atlanta, at a dedication ceremony for an addition to the Newton County Judicial Center. Local and state leaders were part of a large crowd that gathered outside under sunny skies. Georgia Supreme Court Chief Justice Harold Melton struck a light note in his introduction, mentioning that Thomas and his wife enjoy "glamping."

That drew a chuckle from the crowd and from Thomas, who explained that glamping is "basically camping with amenities."

"When you grow up without electricity and running water, you appreciate amenities," said Thomas, who was born in the Pinpoint community near Savannah. "It's a wonderful thing to be around nature. I don't have to be part of it. I like air conditioning."

Thomas, appointed to the high court by President George H. W. Bush in 1991, is the court's longest-serving current justice and one of its most conservative. He spent the past week at the University of Georgia's law school and said he would move back to his home state if it were up to him.

"But sometimes we are called to do what we must do, and it's our duty then to simply allow that will to be done, not ours," he said.