Strangers rescue woman trapped in burning car on I-85

A group of Good Samaritans rescued a woman who crashed on I-85 as her car caught on fire.

DEKALB COUNTY, Ga. - A fiery crash on I-85 Southbound sent a group of strangers into action Friday afternoon. DeKalb County Police said a woman lost control near the Chamblee tucker road exit and spun across five lanes of traffic. Witnesses said she hit the wall, and then, a tow truck driving south hit her head on.

Washington said he couldn't hit the brakes fast enough. "There was a pick up truck, and I guess she lost control because as she came around the corner, the truck started to spin around," he said.

Washington said his truck smashed into the woman driving the pickup. He was okay, but the woman was trapped. "I was calling her name, telling her to get out, but she wasn't moving," said Washington. "I kept saying 'Hey! You've gotta get out! The car is on fire!' And she seemed like she didn't know where she was," said Washington.

Smoke and flames started billowing out of the hood of her car as strangers rushed to help. "You could see the hood of the vehicle, the flames just rumbling under the hood," said Washington. 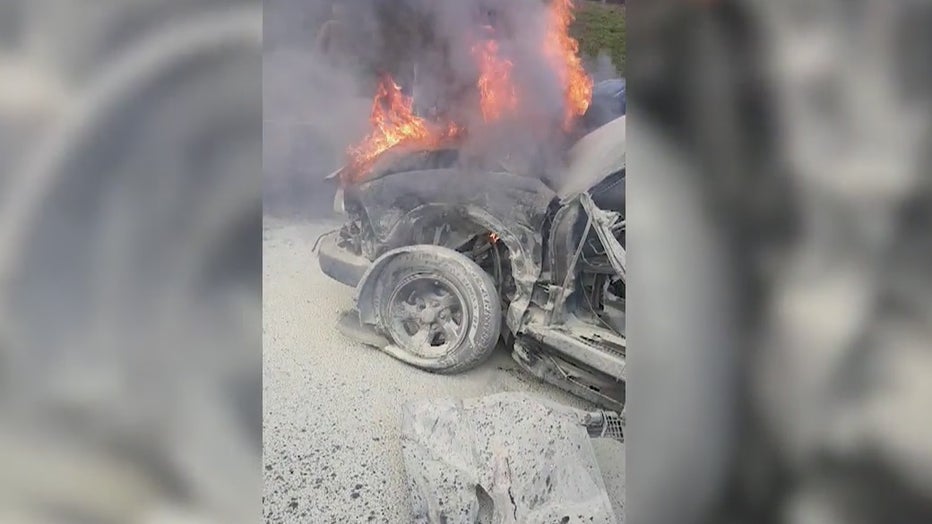 That's when Washington and another stranger jumped into action. "I used the knife to cut her out because the steering wheel was on her knees and the door was crushed in, so that's when I went to the passenger side and pulled her out," said Washington.

Washington said someone with a fire extinguisher helped put out her car fire until fire crews arrived. The group of people waited with the woman until the ambulance took her to the hospital.

Washington said he has a message for that woman as she recovers.

"I hope, I pray everything's okay," he said.

DeKalb County Police have not confirmed the extent of the female driver's injuries. Washington said she was able to speak a little to the group and to the paramedics before she went to the hospital.