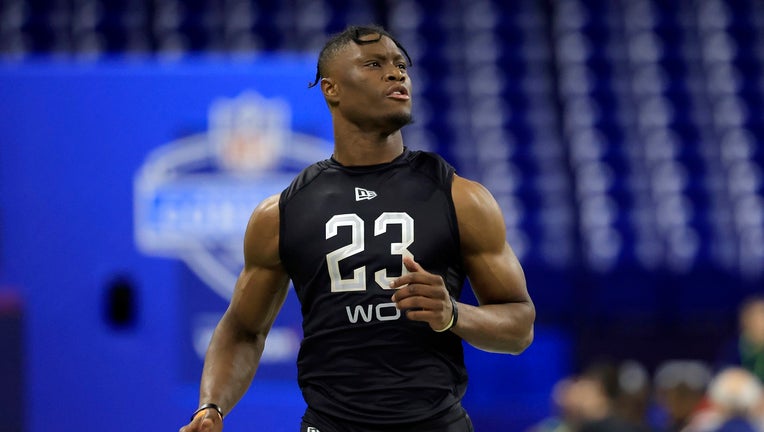 George Pickens #WO23 of the Georgia runs the 40 yard dash during the NFL Combine at Lucas Oil Stadium on March 03, 2022 in Indianapolis, Indiana. (Photo by Justin Casterline/Getty Images)

PITTSBURGH - The Pittsburgh Steelers continued their youth movement on offense, selecting Georgia wide receiver George Pickens in the second round of the NFL draft Friday night.

The Steelers then added Texas A&M defensive lineman DeMarvin Leal in the third round, giving them some depth and youth to a unit in desperate need of both.

The 6-foot-3, 200-pound Pickens should help the Steelers deal with the loss of JuJu Smith-Schuster, who left for Kansas City in free agency. Pickens joins a group that includes Diontae Johnson and Chase Claypool.

Pickens caught 85 passes for 1,240 yards in his first two seasons with the Bulldogs in 2019 and 2020 before tearing the ACL in his right knee last March. Pickens returned near the end of the 2021 season and caught five passes for 107 yards, including a 52-yard reception in Georgia’s victory over Alabama in the national championship game.

Steelers offensive coordinator Matt Canada pointed to Pickens’ decision to come back in the same season rather than point toward the 2023 draft as proof of his toughness and potential.

"He could have said, ‘Hey, I’m going to get healthy and wait,’" Canada said. "That shows a lot about him there."

The selection continues a generational shift on offense that began in earnest last April when the Steelers grabbed running back Najee Harris in the first round and tight end Pat Freiermuth in the second.

Pittsburgh used the 20th overall pick in this year’s draft to take Kenny Pickett, who threw 42 touchdowns last season for the University of Pittsburgh on his way to winning ACC Player of the Year.

Pickens gives whomever the starting quarterback will be in Week 1 — whether it’s Pickett, Mitch Trubisky or Mason Rudolph — another big target to join the 6-4 Claypool and the 6-5 Freiermuth.

Canada believes he can have Claypool or Pickens line up in the slot despite their size and the fact all three of Pittsburgh’s top receivers can get downfield — Pickens ran the 40-yard dash in a respectable 4.47 seconds — should only make the Steelers that much harder to defend.

"The more weapons you have the better," Canada said. "The more competition you have in any room, the better."

Leal joins a defense that is smarting after finishing dead last in the NFL against the run in 2021. The loss of veteran defensive tackle Tyson Alualu in Week 2 and the season-long absence of Stephon Tuitt turned a longtime strength into a glaring weakness despite the stellar play of All-Pro Cam Heyward.

Alualu is expected to return in the fall, though he does turn 35 next month while Tuitt’s status remains uncertain.

The 6-foot-4, 291-pound Leal could play either inside or at defensive end in Pittsburgh. He collected 8 1/2 sacks last season for the Aggies amid a career-high 58 tackles.