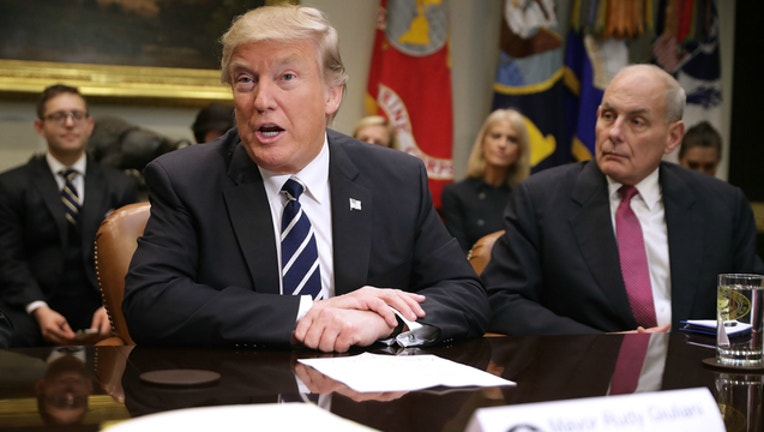 President Trump delivers remarks in a meeting with John Kelly (then Homeland Security Secretary) and other government cyber security experts in the Roosevelt Room at the White House January 31, 2017. (Photo by Chip Somodevilla/Getty Images)

President Donald Trump is scrambling to find a new chief of staff after his first choice to replace John Kelly bailed at the last minute and several other potential successors signaled they weren't interested in the job.

Back to square one, Trump is mulling over a list of at least four potential candidates after Nick Ayers, Vice President Mike Pence's chief of staff, took himself out of the running Sunday and decided that he would instead be leaving the White House. The announcement surprised even senior staffers who believed that Ayers' ascension was a done deal.

Trump is now soliciting input on a list of candidates that is said to include Office of Management and Budget Director Mick Mulvaney, Rep. Mark Meadows, R-N.C., the chairman of the conservative House Freedom Caucus, and former New Jersey Gov. Chris Christie. And allies are pitching Trump on even more contenders.

But as quickly as names were being floated, candidates appeared to be pulling themselves from consideration, underscoring the challenges of working for a mercurial president who has acknowledged that he likes to surround himself with chaos and despises any suggestion he's being managed.

Trump's administration has set records for staff turnover, and the president has often struggled to attract experienced political professionals, a challenge that has grown more difficult with the upcoming threat of costly Democratic oversight investigations and an uncertain political environment.

Those who take high-level positions in the White House at this time open themselves up to potential legal exposure and pricey lawyer bills, said David B. Cohen, a political science professor at The University of Akron who co-wrote a book on chiefs of staff.

After reports surfaced Monday that he was unwilling to take the job, Meadows told Politico Playbook: "Serving as Chief of Staff would be an incredible honor. The President has a long list of qualified candidates and I know he'll make the best selection for his administration and for the country."

Meanwhile, U.S. Trade Representative Robert Lighthizer, a potential contender, said he was "entirely focused" on his current position. A person familiar with Treasury Secretary Steven Mnuchin's thinking but not authorized to speak publicly made clear he, too, is happy in his current post.

While some of the reactions may be strategic posturing, there is also ample reason for any aspiring chief of staff to give pause to the notion of taking the job.

Trump has already burned through two chiefs of staff — a former chairman of the Republican National Committee and a retired Marine four-star general — subjecting them to regular humiliation and ridicule.

Former RNC Chairman Reince Priebus's departure from the White House was unceremoniously announced by tweet. Nearly 18 months later, Trump stepped on an orderly succession plan for Kelly, making a surprise Saturday announcement on the White House lawn that the retired general would be leaving by year's end.

Ayers' ascension and Kelly's departure looked like a done deal Friday night, according to multiple people in and close to the administration, with an announcement planned for Monday. Trump and Ayers had discussed the job for months, and the president had already been steering inquiries to the Pence staffer rather than Kelly. These people, like others, spoke on the condition of anonymity to discuss sensitive personnel matters.

But Trump jumped the gun Saturday, and Ayers re-evaluated his decision. While a White House official said Ayers' decision was driven by a desire to return to Georgia to be closer to his family, people familiar with his thinking said he was also worried about scrutiny of his former political consulting business. He and Trump also could not reach agreement on Ayers' length of service. Ayers wanted to serve on an interim basis; Trump wanted a two-year commitment.

Trump was stung by Ayers' decision to back out, according to people close to him. The embarrassment comes at a pivotal time for Trump, as he prepares for re-election while facing an expected onslaught of investigations from Democrats who will take control of the House and amid the ongoing Russia probe.

When Trump appoints a replacement for Kelly, he will set a record for most chiefs of staff within the first 24 months of an administration, according to an analysis by Kathryn Dunn Tenpas of the Brookings Institution.

Yet Trump once mocked his predecessor for chief of staff turnover.

"3 Chief of Staffs in less than 3 years of being President: Part of the reason why @BarackObama can't manage to pass his agenda," Trump wrote in a 2012 tweet.

Trump had said Saturday that he would be announcing Kelly's replacement in the next day or two. But with Ayers no longer waiting in the wings, there is fear that Trump may not have someone in place in time for Kelly's departure or that he will pick the first person who comes to mind as he tries to counter perceptions that no one wants the position.

Two Republicans close to the White House said Trump's son-in-law, Jared Kushner, and his daughter Ivanka Trump, who were among Ayers' top backers, were still trying to have an outsized hand in the restarted process, telling the president that the two of them, as family, would be the only ones Trump could count on to stay the course in the coming months. The Republicans spoke on condition of anonymity because they weren't authorized to speak publicly about private conversations.

Trump has also told confidants that he is eager to bring on someone he gets along with as his third chief of staff. While he still had a measure of respect for Kelly, the men's personal relationship had long been frosty. This time, Trump has told allies, he wants someone he can chat with — trading gossip and complaining about media coverage — as well as someone more attuned politically.

Meanwhile, the list of names floated for the job continued to grow, including mentions by people close to the administration of former Trump deputy campaign manager David Bossie, acting Attorney General Matthew Whitaker — even White House communications director Bill Shine and press secretary Sarah Huckabee Sanders. Many of them weren't being taken seriously, but the breadth of the list highlighted the uncertainty in Trump's political orbit over the job hunt.

Trump has also told people around him that he misses the more freewheeling feel of the Oval Office under Priebus and would not let his new chief of staff set the kinds of limits he allowed Kelly to impose.