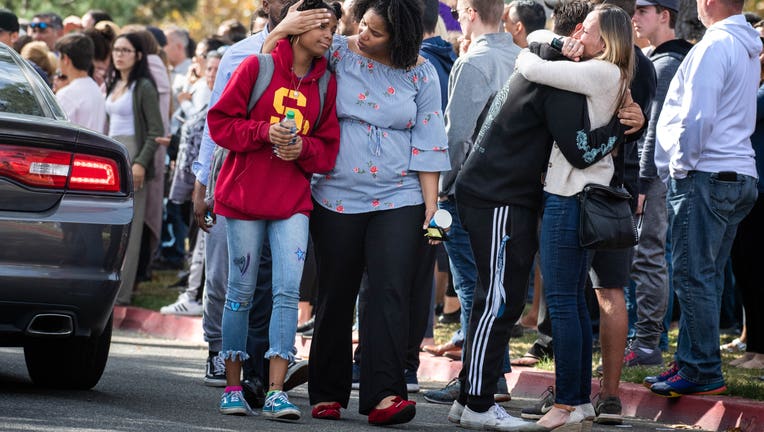 SANTA CLARITA, Calif. - It’s the dreaded words no parent ever wants to hear “shooter on campus”, but sadly it seems school shootings are happening more often.

On November 14, a typical Thursday morning at Saugus High School turned deadly when a 16-year-old student opened fire in the quad... shooting five students before turning the gun on himself.

Two students, 15-year-old Gracie Anne Muehlberger and 14-year-old Dominic Blackwell died as a result of their injuries; several other students were also injured.

The Los Angeles County Sheriff’s Department says the alleged suspect used a .45 caliber semi-automatic pistol, which he pulled out from his backpack prior to the shooting.

The sound of gunfire sent some students running while others and staff followed recently practiced security procedures. Many students we spoke with say they ran for cover in classrooms and locker rooms barricading themselves inside and pushing items against the doors and windows.

“They did exactly as they were trained and that definitely assisted. And when the time came to provide aid to those that were injured, they took them in provided first aid while they were waiting for first responders,” stated Sheriff Alex Villanueva.

“Run… if you can’t run hide. If you can’t hide then you do something, fight back. And the kids in this school did all of the above," added Villanueva.

How to train for active shooters in schools

While on Good Day LA Coughran said a student’s everyday tools can be used as a possible weapon in the event of an emergency.

“Throwing a backpack, hot drink at them, distracting them is something you can do to try to get away and stop this person.”

“You have to get out of that open area quickly and into a place that can keep you sheltered and away from those bullets,” Coughran added. “They dropped their things like their backpacks and the things in their hands and took off running. They got out of their quickly. We see the neighbors bringing them into the houses and running off campus. Those were some of the best strategies to try to get away as quickly as you can, especially in those open areas.”

Situations like the one at Saugus High School and other shootings across the nation have increased the need for active shooter drills.
The Los Angeles County Sheriff’s Department says to talk with your friends and family about a preplanned response.

Their tips to the public include:

The sheriff’s department says it’s important to keep emergency supplies such as a first aid kit, food and water with you nearby and placed in an area that can quickly be accessed.

“If there is an active threat at your school or in your area, run/escape if possible, hide if escape is not possible, or fight if that is your last resort,” the sheriff’s department wrote in a statement online.

They also recommend people to say something if they see something suspicious.