Automaker Rivian announced it is building a $5 billion electric truck plant in Georgia. Gov. Brian Kemp said the economic deal is the largest in state history.

Rivian, based in Irvine, California, is a startup manufacturer of electric trucks and commercial delivery vans, challenging both established automakers like Ford and General Motors and electric vehicle leader Tesla.

The plant could grow to as many as 10,000 workers, sources said, which would make it among the largest auto assembly complexes in the United States, rivaled by behemoths such as the 11,000-worker BMW complex in Spartanburg, South Carolina, and Ford Motor Co.’s 8,600-worker plant in Louisville, Kentucky.

Inspecting a Rivian R1T door panel prior to final assembly on the trim line. (Courtesy of Rivian)

MEGA PROJECT IN DOWNTOWN COULD CHANGE FACE OF ATLANTA

Rivian will be the largest industrial announcement in Georgia history, surpassing the 4,400-worker Kia complex that opened in West Point in 2009. Georgia has had a number of failed auto plant recruitments. Rivian will give Georgia Gov. Brian Kemp another point to bolster his claims that he has been an excellent steward of Georgia’s economy, even as faces Republican and Democratic challengers when he runs for reelection next year.

The city of Fort Worth, Texas, offered Rivian a $440 million incentive package to lure the plant during the summer, while published reports indicate Rivian also considered sites in Arizona and Michigan.

Founder and CEO Robert Scaringe told Bloomberg Television in November that the ability to recruit good workers was the most important factor in the decision. Rivian’s existing plant in Normal, Illinois, like most auto plants that have opened in recent decades, is not unionized. 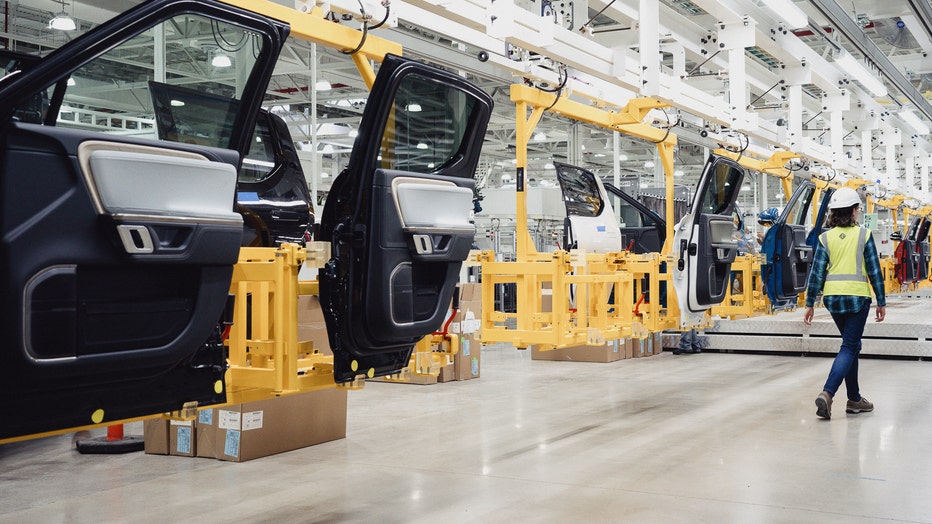 R1T door panels ready for installation on the trim line. (Courtesy of Rivian)

Georgia officials are unlikely to detail the full incentive package offered to Rivian on Thursday, but the company could max out what Georgia calls its "mega project tax credit," for companies that hire at least 1,800 people or invest at least $450 million. That could be worth $118 million in state income tax credits. Local governments are likely to abate property taxes.

Kia got more than $450 million in incentives for its plant southwest of Atlanta. Georgia has promised $300 million of incentives to the $2.6 billion, 2,600-worker battery plant being built by SK Innovation in Commerce, Georgia, northeast of Atlanta.

Rivian, like Tesla, deals with its customers directly instead of through dealers. Its arrival in Georgia could prompt the state to loosen a law that mostly prohibits manufacturers from selling directly.

Amazon, which owns a slice of the company, has ordered 100,000 delivery vans, launching Rivian into the commercial vehicle business.

Rivian is flush with cash following a $11.9 billion stock offering Nov. 10 that took the company public, allowing it to finance the new plant. Its market value is nearly $95 billion, more than either General Motors or Ford.

The company argues that electric vehicle adoption is at the "tipping point" and it is well positioned for success because trucks and SUVs have long been the most profitable vehicles sold. But some analysts question whether it needs another plant besides the former Mitsubishi plant in Illinois, that Rivian bought for $16 million in 2017. Rivian says it has a yearly capacity of 150,000 vehicles, but is looking to expand there as well.

"It seems like it might be a little premature to invest that much in another large plant just yet," said Sam Abuelsamid, principal mobility analyst for Guidehouse Insights, who said Rivian also may be looking for a manufacturing site in Europe.

Given the size of the Georgia plant, Abuelsamid expects it to make other parts for the vehicles, similar to electric vehicle leader Tesla making seats at its factory in Fremont, California.

Rivian has cash in the bank, but will burn through that quickly unless it starts delivering vehicles and generating cash, jeopardizing its market darling status, Abuelsamid said. The company needs more retail customers and commercial vehicle buyers other than Amazon, he said.

"If actual deliveries don’t start picking up, the markets could turn against them as they have with some other EV startups not called Tesla," Abuelsamid said. "Unlike Tesla, Rivian will be facing serious competition in a much shorter time frame than the near- decade head start that Tesla had."

Ford and GM plan to start selling their own electric pickup trucks in the next year or two, while Tesla also plans a new pickup. That’s part of a wave of electric vehicle investment, with SK’s $5 billion battery plant northeast of Atlanta just one example. Ford announced in September it would spend $11.4 billion to build three battery factories and an assembly plant in Kentucky and Tennessee.

The LMC Automotive consulting firm expects U.S. sales of new fully electric vehicles to hit nearly 400,000 this year, nearly double last year’s figures. But they still make up only about 2.6% of sales. The firm expects sales to grow to more than 730,000 next year and more than 2 million by 2025. Even at 2 million, EV sales still would be only about 12% of U.S. new vehicle sales.