In major U.S. cities, people took to the streets to protest the death of George Floyd.

Police officers across the U.S. were targeted in shootings and vehicular attacks Monday night as protests continued in major cities for the seventh night despite President Trump’s vow to clamp down on violence.

The demonstrations on Monday marked a week of unrest since unarmed black man George Floyd died when a white Minneapolis officer jammed his knee into the back his neck in a shocking incident caught on video. Despite tens of thousands marching peacefully in demonstrations against police brutality and systemic racism, protests over Floyd’s death have been nonetheless overshadowed by violence, looting and vandalism that has engulfed U.S. cities.

In St. Louis, Mo., Monday night, four police officers were shot during protests in the city’s downtown area, two in the leg, one in the foot and one in the arm.

Police Chief John Hayden said they were hit by gunfire by “some coward” while standing on the side of a police line.

“As we speak we’re trying to get control out of this city, still hearing gunfire and everything," he said. I don’t know what else to say. This is horrible. Thank God, they’re alive.”

The St. Louis Post-Dispatch reported that all of the officers were conscious and breathing after being rushed to the hospital.

In Las Vegas, Nevada, an officer was shot in the head at the Circus Circus Hotel and Casino on the Strip. A source told 8News Now that the officer was in a fight with another suspect when someone walked up behind and shot the officer, who is now on life support.

It was one of two officer-involved shootings in the city; police said officers fired on a suspect at the Federal Courthouse in a separate incident. The suspect was hit several times.

Meanwhile, in Richmond, Va., two police officers and a suspect were injured after a shooting, according to NBC12. 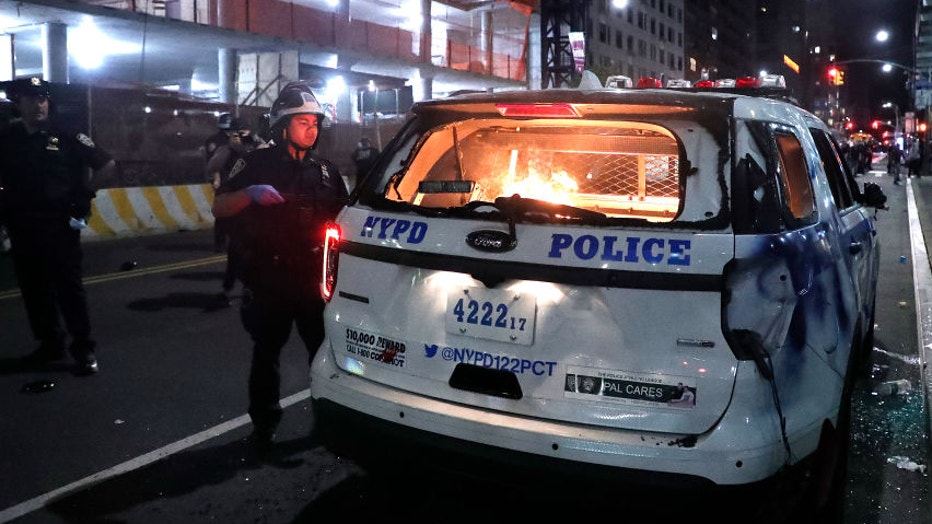 Police car is on fire during a demonstration in response to the death of a Minneapolis man George Floyd on May 29, 2020 in New York City.(Photo by John Lamparski/NurPhoto via Getty Images)

RPD officers were called to investigate a report of an armed person on Semmes Avenue early Tuesday morning. When they arrived, gunfire erupted. The two cops and the suspect were taken to local hospitals.

In Buffalo, N.Y., an SUV plowed through a group of law enforcement during a Floyd demonstration, injuring at least two officers.

Video posted by a witness showed a line of officers, backed up by an armored personnel carrier, rushing and tackling a man who was being interviewed by a man with a TV camera about 9:30 p.m. 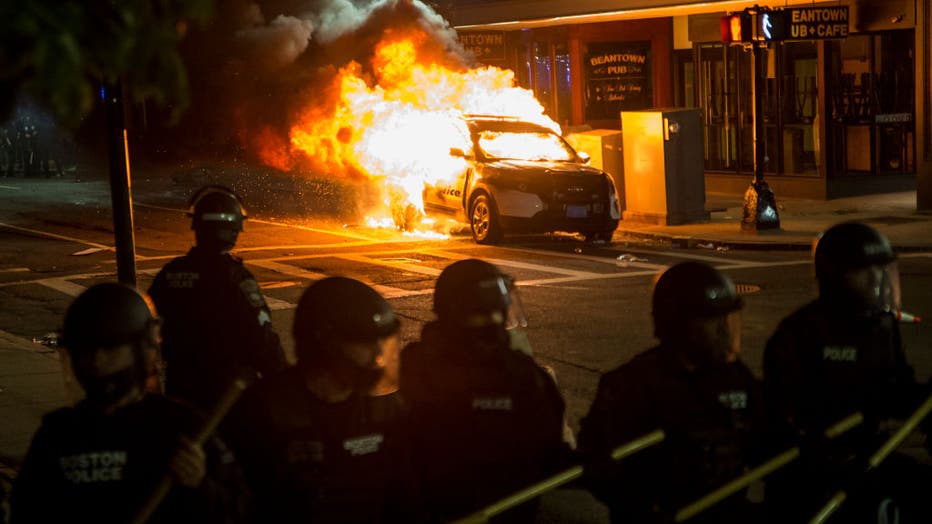 A police cruiser burns behind the Police line near the intersection of Park and Tremont as a protest against police brutality pushes through the streets of Boston on May 31, 2020. (Photo by Blake Nissen for The Boston Globe via Getty Images)

Moments later, officers ran as the SUV barreled through a cluster, with at least one appeared to go under the vehicle’s wheels. The SUV was then able to drive round an armored vehicle and speed off.

In a similar incident in the Bronx in New York City, an NYPD officer investigating reports of break-ins was struck by a vehicle early Tuesday in a hit-and-run. The officer is in a stable condition.

And in another incident in the Bronx, an NYPD officer was attacked by several men as witnesses recorded the incident.

The latest wave of protests came hours after President Trump vowed in a Rose Garden speech to restore law and order, and police under federal command forced back peaceful demonstrators with tear gas so he could walk to a church near the White House known as “The Church of the President” that was set on fire during Sunday night’s rioting. 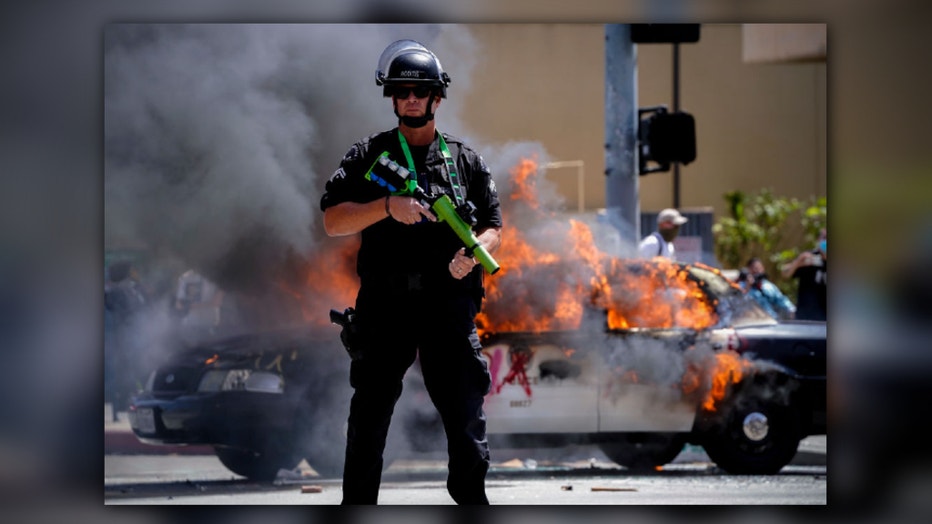 A police officer stands in an intersection as a police car burns during demonstrations following the death of George Floyd on May 30, 2020 in Los Angeles, California. (Photo by Warrick Page/Getty Images)

The president demanded an end to the violence in remarks from the Rose Garden and vowed to use more force to achieve that aim.

If governors throughout the country do not deploy the National Guard in sufficient numbers to “dominate the streets,” Trump said the U.S. military would step in to “quickly solve the problem for them.”

“We have the greatest country in the world,” the president declared. “We’re going to keep it safe.”

More than 5,600 people nationwide have been arrested over the past week for a myriad of offenses, according to a count by The Associated Press.