Reaction pours in to series of tweets from Georgia Congresswoman Marjorie Taylor Greene.

RINGGOLD, Ga. - The leader of the House Republicans Conference has condemned Georgia Rep. Marjorie Taylor Greene for statements comparing people who received the COVID-19 vaccine to Jewish people during the Holocaust.

Tuesday morning, Greene responded to a story on Twitter of a grocery store chain putting vaccination status on their employee's nametags, saying it was "just like the Nazi’s forced Jewish people to wear a gold star."

The congresswoman, who represents Georgia's 14th District, continued with the comparison in other tweets, saying "It appears Nazi practices have already begun on our youth. Show your VAX papers or no in-person class for you."

An hour after her first tweet, Greene said that she "never compared it to the Holocaust, only the discrimination against Jews in early Nazi years."

However, McCarthy disagreed with Greene, saying that "Marjorie is wrong, and her intentional decision to compare the horrors of the Holocaust with wearing masks is appalling. The Holocaust is the greatest atrocity committed in history. The fact that this needs to be stated today is deeply troubling."

"Americans must stand together to defeat anti-Semitism and any attempt to diminish the history of the Holocaust," McCarthy said. "Let me be clear: the House Republican Conference condemns this language." 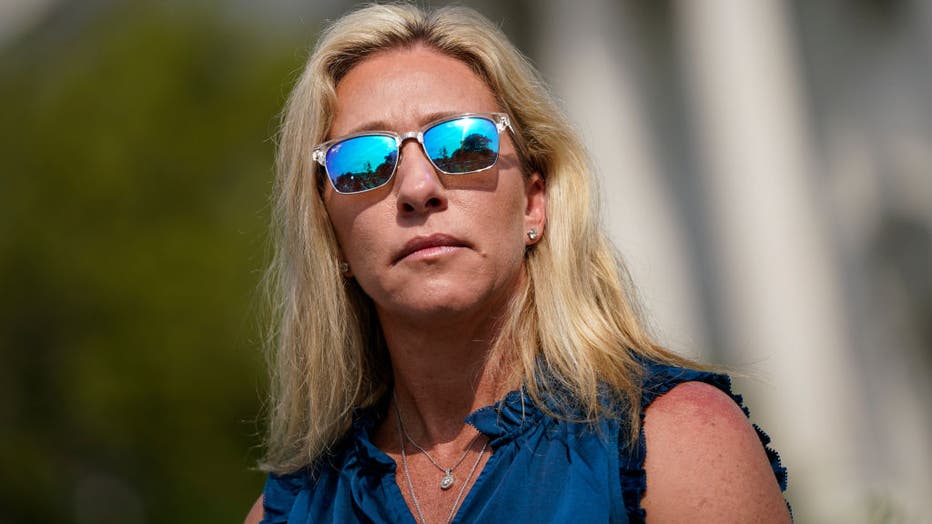 Earlier in May, Democrats criticized the Georgia Republican for a series of confrontations between herself and Rep. Alexandria Ocasio-Cortez.

House Speaker Nancy Pelosi said Greene’s behavior was "beyond the pale" and raised the possibility of an ethics investigation.

"This is beneath the dignity of a person serving in the Congress of the United States and is a cause for trauma, and fear among members, especially on the heels of an insurrection," Pelosi said

In February, House Democrats and 11 Republicans voted to strip her of her committee assignments.

As a congressional candidate, Greene posted a photo in 2020 of herself with a gun next to images of Ocasio-Cortez and fellow Democratic Reps. Ilhan Omar of Minnesota and Rashida Tlaib of Michigan.

Before her election, she also supported Facebook posts that advocated violence against Democrats and the FBI. One suggested shooting Pelosi in the head. In response to a post raising the prospect of hanging former President Barack Obama, Greene responded that the "stage is being set."

In one 2018 Facebook post, she speculated that "lasers or blue beams of light" controlled by a left-wing cabal tied to a powerful Jewish family could have been responsible for sparking California wildfires.

And in February 2019, Greene appeared in another online video filmed at the U.S. Capitol, arguing that Omar and Tlaib weren’t "really official" members of Congress because they didn’t take the oath of office on the Bible. Both women are Muslim.