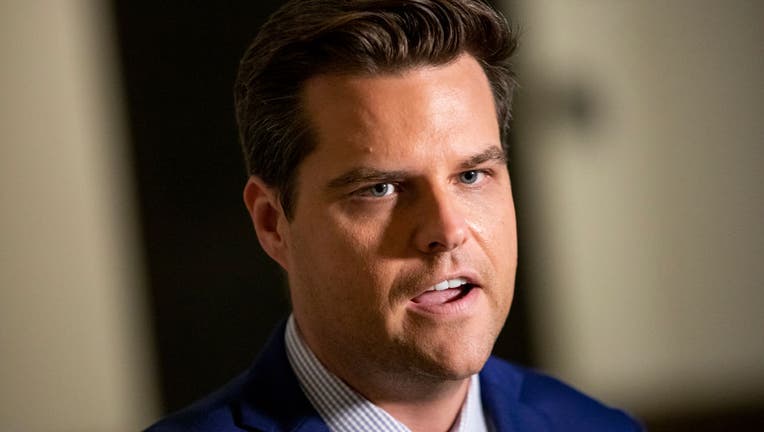 U.S. Rep. Matt Gaetz (R-FL) speaks to the media outside of the Sensitive Compartmented Information Facility (SCIF) during the continued House impeachment inquiry against former President Donald Trump at the U.S. Capitol. (Photo by Samuel Corum/Getty

Reps. Matt Gaetz, R-Fla., and Marjorie Taylor Greene, R-Ga., are teaming up for a joint rally tour across America this summer.

The Republican lawmakers revealed their plan to launch "The America First Tour" in a press release on Friday. The tour announcement comes as Gaetz faces a federal investigation into alleged sex crimes.

According to the release, the tour is set to kick off May 7 and aims to "rally the 74 million Americans that voted for President Trump" in the 2020 election, as well as highlight the "destructive failings" of President Biden.

"There are millions of Americans who need to know they still have advocates in Washington D.C., and the America First movement is consistently growing and fighting," Gaetz said.

"The issues that motivate us include ending America's forever-wars, fixing the border Joe Biden broke on day one, prioritizing Americans not illegal migrants, reshoring industries sold to foreign adversaries, ensuring real election integrity, and taking on the threat of the Chinese Communist Party," said the congressman.

"These issues are bigger than any one election and we remain ready to take our party and our country back," Gaetz added.

Both members of Congress carry controversies with them.

Greene faced backlash over resurfaced Facebook comments that suggested violence against Democrats and circulated conspiracy theories. She apologized for the comments but was still removed from her committee assignments by House Democrats.