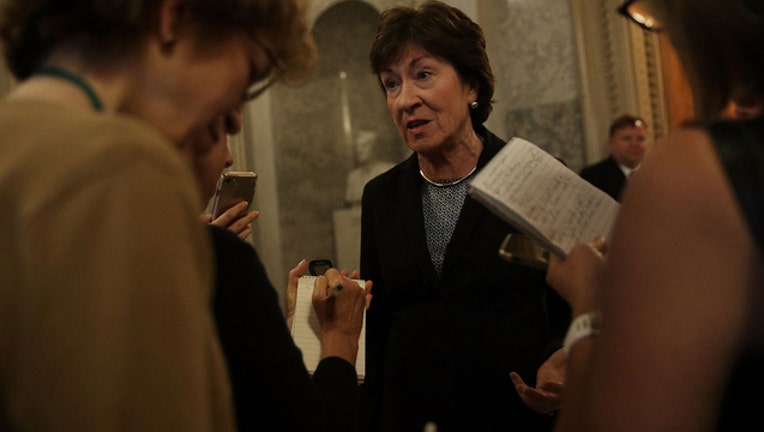 U.S. Sen. Susan Collins speaks to members of the media as she arrives for a vote at the Capitol September 5, 2017 in Washington, DC. (Photo by Alex Wong/Getty Images)

The Maine moderate said in a statement that the legislation would make "devastating" cuts in the Medicaid program for poor and disabled people, drive up premiums for millions and weaken protections Obama's law gives people with pre-existing medical conditions. She said the legislation is "deeply flawed," despite eleventh-hour changes its sponsors have made in search of support.

The only way Republicans could resuscitate their push would be to change opposing senators' minds, which they've tried unsuccessfully to do for months. Collins told reporters that she made her decision despite a phone call from President Donald Trump, who's been futilely trying to press unhappy GOP senators to back the measure.

"They're still working it and a lot of conversations are going on," No. 3 Senate GOP leader John Thune of South Dakota told reporters. But he conceded that a revival would be "a heavy lift" and the prospects were "bleak."

The collapse marks a replay of the embarrassing loss Trump and party leaders suffered in July, when the Senate rejected three attempts to pass legislation erasing Obama's 2010 statute. The GOP has made promises to scrap the law a high-profile vow for years, and its failure to deliver despite controlling the White House and Congress has infuriated conservatives whose votes Republican candidates need.

Republicans had pinned their last hopes on a measure by GOP Sens. Bill Cassidy of Louisiana and South Carolina's Lindsey Graham. It would end Obama's Medicaid expansion and subsidies for consumers and ship the money — $1.2 trillion through 2026 — to states to use on health services with few constraints.

With their narrow 52-48 majority and solid Democratic opposition, three GOP "no" votes would doom the bill. GOP Sens. John McCain of Arizona, Rand Paul of Kentucky and Texas' Ted Cruz have said they oppose the measure, though Cruz aides said he was seeking changes that would let him vote yes.

Sen. Lisa Murkowski, R-Alaska, remains undecided. Murkowski, who voted against the failed GOP bills in July, has said she's analyzing the measure's impact on her state, where medical costs are high.

The Senate must vote this week for Republicans to have any chance of prevailing with their narrow margin. Next Sunday, protections expire against a Democratic filibuster, bill-killing delays that Republicans lack the votes to overcome.

It was unclear if Senate Majority Leader Mitch McConnell, R-Ky., would hold a roll call. Thune said he believed McConnell would have a vote if Republicans "have at least some hope that we would pass it."

Collins announced her decision shortly after the nonpartisan Congressional Budget Office said "millions" of Americans would lose coverage under the bill and projected it would impose $1 trillion in Medicaid cuts through 2026.

Collins said the eleventh-hour revision "epitomizes the problems" with the GOP-only process.

Collins decision drew a shout-out from late night talk-show host Jimmy Kimmel, who tweeted, "Thank you @SenatorCollins for putting people ahead of party. We are all in your debt." Kimmel had been an outspoken critic of the bill.

Kentucky's Paul said the bill spent too much and said Republicans were motivated by fear of punishment by conservative voters if they failed.

Loud protesters forced the Senate Finance Committee to briefly delay the chamber's first and only hearing on the charged issue. Police lugged some demonstrators out of the hearing room and trundled out others in wheelchairs as scores chanted, "No cuts to Medicaid, save our liberty."

On Monday, Trump took on McCain, who'd returned to the Senate after a brain cancer diagnosis in July to cast the key vote that wrecked this summer's effort. Trump called that "a tremendous slap in the face of the Republican Party" in a call to the "Rick & Bubba Show," an Alabama-based talk radio program.

Cassidy and Graham defended their bill before the Finance committee.

"I don't need a lecture from anybody about health care," Graham told the panel's Democrats. Referring to Obama's overhaul, he added, "What you have created isn't working."

Also appearing was Sen. Mazie Hirono, D-Hawaii, who learned earlier this year that she has kidney cancer.

She said colleagues and others have helped her battle the disease with compassion, saying, "Sadly, this is not in this bill."