LOS ANGELES - Eric Weddle is rarely at a loss for words, but the safety was speechless and flabbergasted after his Los Angeles Rams were dominated by the Baltimore Ravens on Monday night. 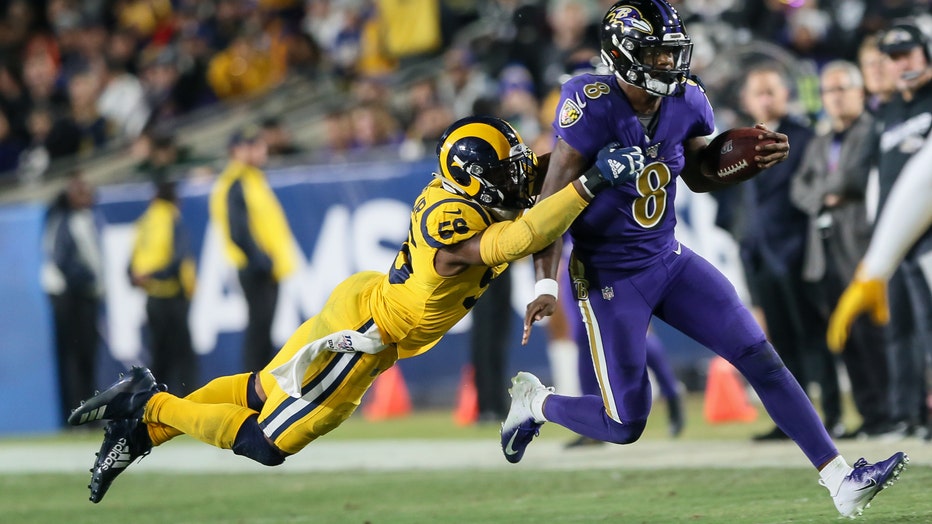 Then again, plenty of teams have been left speechless after seeing Lamar Jackson up close and personal.

“I never thought in a million years we would get completely destroyed. It’s tough to put into words,” Weddle said after the Rams’ 45-6 loss. “They are one of the best teams in the league. They are playing at a high level and we didn’t match up to it.”

The Rams became the first defense in nearly 11 years to allow a touchdown on each of their first six possessions. They also allowed 285 rushing yards, which is the most that a Wade Phillips defense has allowed when he has been either a coordinator or head coach.

Weddle thought that the Rams would be able to adjust to Jackson’s speed after the first couple drives, but it never happened. It wasn’t until Baltimore’s eighth possession, when Robert Griffin III was under center, that the Rams finally forced a punt.

For those who thought that Weddle might have a little bit of an advantage after being on the same team as Jackson last year, Weddle had a simple retort - he wasn’t running this offense as a scout-team quarterback.

“You can’t emulate it. Lamar is the fastest guy on the field. He’s a MVP candidate for a reason,” Weddle said. “Half the time I didn’t know who had the ball until I had to go to the line and tackle him.”

Baltimore averaged 5.9 yards per rushing play. The only time they had negative rushing yards was Griffin’s kneel downs at the end of the game.

Jackson completed 15 of 20 for 169 yards and four touchdowns along with 95 yards rushing. He joined Cam Newton as the only quarterbacks to throw four touchdowns and run for over 90 yards in a game.

“They ran hard and were efficient moving the ball. We didn’t do enough. It was one of those deals where it spiraled out of control,” linebacker Clay Matthews said.

While Baltimore was nearly perfect on offense, the Rams made plenty of mistakes. They went three-and-out on their first two possessions and saw Baltimore turn those into touchdowns. Los Angeles drove to the Ravens’ 7 on their third series, but a false start penalty and Todd Gurley losing 5 yards on a screen pass from Jared Goff ended up with them settling for a field goal.

It is the second time in three games the Rams have failed to score an offensive touchdown, while the six points matches last year’s loss at Chicago for least scored in Sean McVay’s three seasons as coach.

“There’s a million things (that have gone wrong this season). We have to be better consistently,” said Goff, who was 26 of 37 for 212 yards and two interceptions.

The Rams (6-5) are two games back of Minnesota for the final playoff spot in the NFC. They travel to Arizona on Sunday before hosting Seattle and then going to Dallas and San Francisco before closing with the Cardinals.

While the odds of the defending NFC champions getting back to the postseason are high, Matthews said they can’t let Monday’s loss linger.

“No one envisioned being in this situation. You figure coming off last season with a few free agents and the draft we would be better. We have to start winning,” he said.